Our final stop was to be Skagway, Alaska, where we had another excursion booked, but we were re-routed to Haines, because of a jet fuel spill in Skagway.  Haines usually hosts cruise ships once a week, on Thursdays, and a few specific times through the season.  Our ship arrived on a Friday, causing many changes in the population's plans for the day! 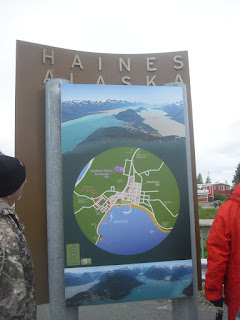 Many excursions were cancelled, but we were fortunate that ours was not -- in fact, it picked up additional participants from the schedule change. 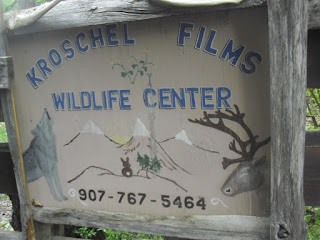 We boarded a motor coach for the 45-minute ride to see the animals at the Kroschel Wildlife Center.  The inhabitants of the family-owned Center have often been used in films from Disney and other companies.  Many (probably most) of the animals are trained to some degree and all are kept outdoors in fenced areas, though the fences have large spaces between the wires so you can take photos that look like you've spotted the creature in its native, wild habitat. 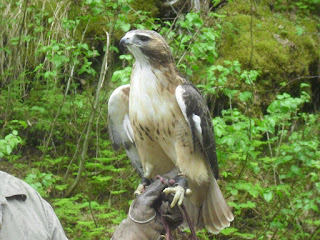 This magnificent falcon greeted us at the entrance.  We went on to observe a wolf, who resembled a pet dog with the guide/refuge owner, as well as a leashed wolverine that similarly followed him and did several "tricks" on command. 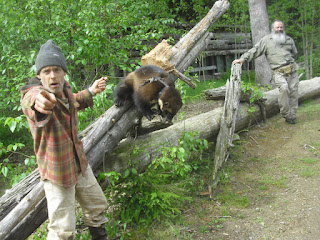 The majestic lynx acted like a typical cat, wandering around his compound, unconcerned with all the people just a few feet away. 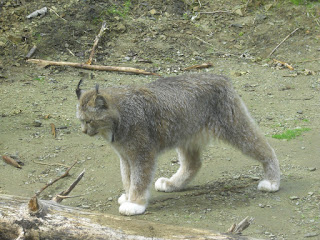 Other animals in residence were a red fox (more gray than red, as he was shedding his winter coat), several members of the weasel family, including a pair of baby sables, and at least half a dozen reindeer. 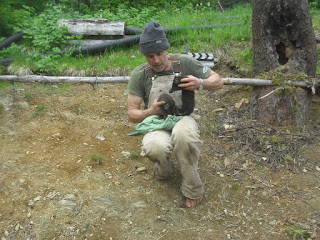 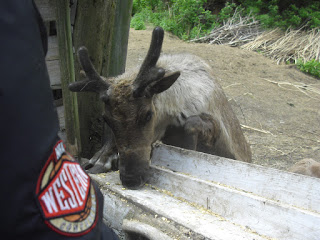 Members of the tour group were encouraged to take advantage of a photo op with a porcupine (that was MUCH bigger than I expected) and a moose.  We were happy to oblige. 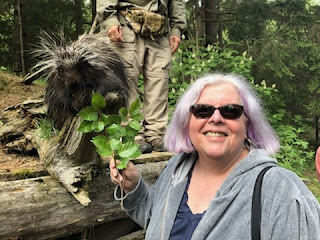 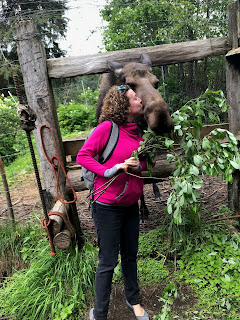 The tour ended with Kitty, the grizzly bear, having a little snack of her favorite pie, blueberry, of course.  (Bear is farther away than appears; one of the few times a photo taken with the "zoom" on my camera didn't come out blurry.) 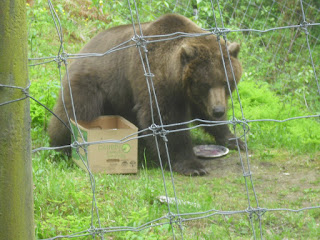 This excursion was so much fun!  I strongly recommend it for anyone -- of any age -- who is in the area whether docking on a cruise ship or visiting Skagway or Haines in some other way.

Before we returned to the ship, we visited the local public library.  This lovely little place offers free wi-fi to all visitors -- a welcome benefit to cruise ship passengers who, for most of a week, have had the choice of no connectivity at all or having to pay a substantial fee to access the ship's network.  There was no doubt that we were visitors, rather than locals, when we sat comfortably, pulled out our phones, and began tapping away.   A donation jar sat on the circulation desk, and I happily inserted some folding money to show, in a small way, our gratitude.  Should you ever find yourself in a similar situation, I strongly urge you to do the same.  LIBRARIES RULE!