Last weekend was our semi-annual quilting retreat.  As usual, the company was superb, the innkeepers were fabulous, and progress was made.   Worked on a quilt for my German daughter and got the center section completed!   Need to add some interesting border(s) and it will be ready to be quilted.  Started on the "I spy" for which I'd been collecting fabrics for the past couple of years.  I have a "sponsored" daughter on the Pine Ridge Lakota Sioux reservation (the poorest county in the U.S.).  When my sponsorship started, she was about 2 or 3 but now she's in 1st (I think) grade.  So I removed the "babyish" blocks and started making red lattice to put between the remaining ones.  Coming along nicely (though the photo of the layout didn't) 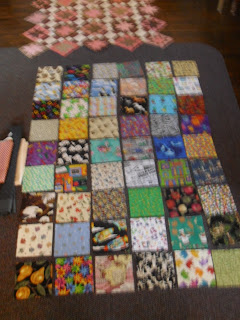 In non-quilty news, I finished a couple of pillowcases for a children's charity,  ConKerr Cancer. This organization's purpose is to coordinate the creation and distribution of a variety of hand-made pillowcases, so that every child who has a serious illness and is admitted to a hospital, can choose one to use and keep.  Members of our group had made pillowcases for ourselves for several years, ever since Helen introduced us to a great, no-exposed-seams method.

In early October, my D#1 had invited me to participate in a women's retreat at the camp where she works in the summer.  That retreat had chosen this as an optional service project so I had prepared a number of "kits", with coordinated and pre-cut fabric, prior to the weekend.  I finished 2 that weekend.  The photo below shows the all 10 of those that were completed.  I made the two on the top left: pirate skull and crossbones, and a collage of balls used in sports.  I started two others but didn't get them finished. 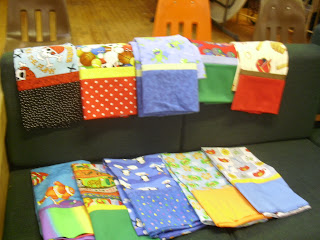 I had suggested to the White Oak group, that, if we wanted an optional "service project" for the retreat, that we make more pillowcases, so I took along my UFP's (unfinished pillowcases) and completed them there. 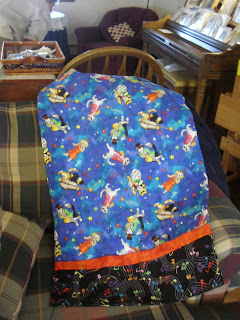 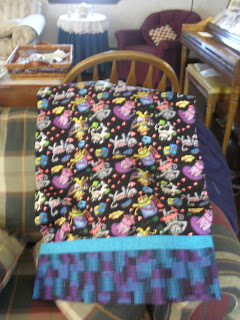 By Sunday brunch, the end of the weekend, a total of 18 pillowcases was ready to be taken home to be washed and delivered to one of the drop-off points, a task which our penultimate member, Pat, offered to take on. 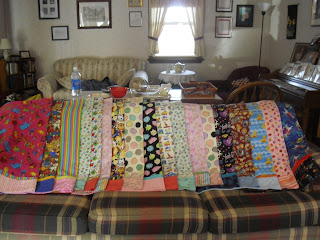 Lovely weather all weekend, my drive home was filled with sunshine and tunes.
at November 20, 2010