I don't claim to have any special knowledge of the troubles in Egypt, except that it seems that if the people want to set up a democracy, they should be supported in their efforts.

But on my trip to Cairo last year, I had the once-in-my-lifetime privilege of visiting the Egyptian Museum on Tahrir Square where protests have been centered.  I have been enamoured and fascinated by ancient Egypt since my elementary school days.  So I would make a special effort to attend exhibitions that made the rounds of U.S. art museums -- most recently the Tut exhibit that came to the Philadelphia Museum of Art.   Though it had few of the most famous artifacts, even the smaller ones were of great interest to me.   When my daughter chose to study for a semester at the American University in Cairo, she invited me to join her for spring break. I had never imagined I would have the opportunity to visit Egypt, experience places like Aswan and Luxor, walk near the Sphinx and the pyramids, and view the treasures housed in the Museum!    It was an offer I couldn't refuse.

So I was quite shaken to read that the Museum had been invaded and some of its priceless antiquities damaged, and quite a relief to read that looters had been caught and the building was now under guard. 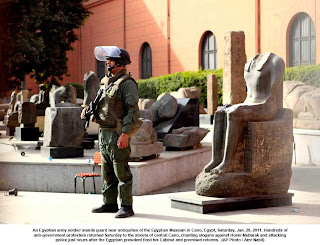 But it was the photos of the interior that were the most troubling. 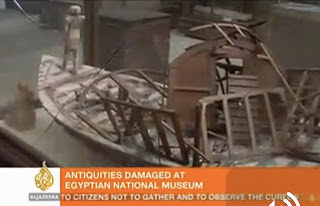 This delicate wooden boat survived centuries well enough to be restored and put on display, but is now splintered -- I can only hope that it can be repaired once again. 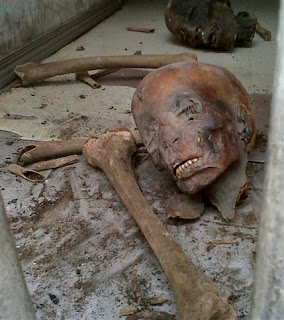 The small number (9-11) mummies in the Museum were all ancient Egyptian royalty, including Rameses III, perhaps the last of the great Pharoahs. Since my visit the mummy of the only female ruler, Queen Hatshepsut had been identified and added to the mummy room.  I cannot imagine how this damage could be repaired.

On a more hopeful note, I was directed to this through a link on a friend's blog.  She said she wished she had written it.  I don't think I have the depth or insight to do so, but I'm certainly grateful that she does.  Alhumdulelah.  (Thanks be to God.)  Salaam. 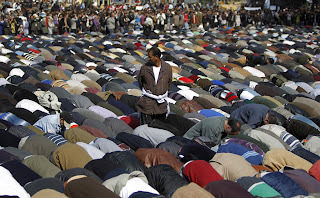