One small step = one large leap

In my previous house, I got used to having a bulletin board in the kitchen.  It was a place for a master calendar with each family members activities noted (color-coded, of course).   It also held the little pieces of paper that would have caused problems if they were lost (like tickets), and a few decorative items including the occasional picture postcard sent by friends or family.  When we moved (April 2010), I put the bulletin board right into the kitchen.  Where it has been sitting ever since, except for the times the kittens cats knocked it over.
The ideal only place it fit was on the side of the laminate enclosure around the refrigerator, which needed holes to be drilled to hang it, as no nail known to me would pierce the rock-hard surface.  Unfortunately, it took me several months to find the drill which had been "deposited" in the garage, along with almost all the other contents of the former basement.   I believe it was around the fall of 2010 when I found it, along with the other power tools. 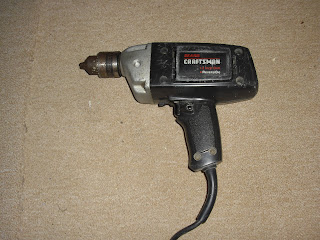 A month or two after the drill had been located, I decided it was time to drill the holes and hang the bulletin board, only to discover that there were no drill bits with it.  Over several weeks, I spent more time digging through the rest of the non-junk from the garage (now relocated to the basement).  No luck.   Finally, I gave up on the search and bought a set of drill bits at Lowe's.   Nice, huh? 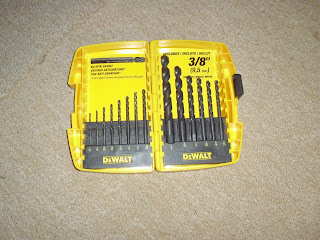 The next time I decided to hang the bulletin board, I gathered the drill and the bits, then noticed that there was no "key" to open the drill chuck to insert and tighten the bit.   Several lifetimes ago, my theatre-shop training taught me to lash the "key" to the cord, so it wouldn't get lost.  Guess my X never learned that trick.    Lowe's had several sizes and, naturally, I didn't know which I needed so I bought them all and returned the ones I didn't need.  Third trip to Lowe's (fortunately I work nearby)and I've-lost-track-of-how-many more months. 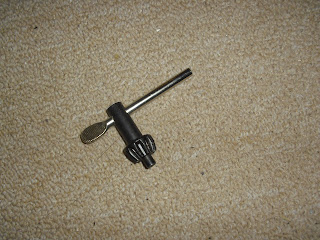 When I assembled all the required parts, the final discovery was that the chuck was rusted shut.  I could turn it to open wider but the three "jaws" that hold the drill bit just sat there, fused into place. 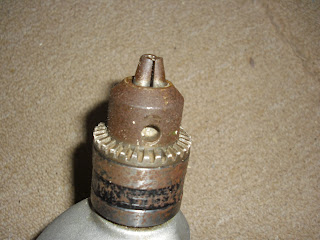 W-D 40 to the rescue.  (Another trip, of course...)  Home to spray the drill and let the chemicals work. 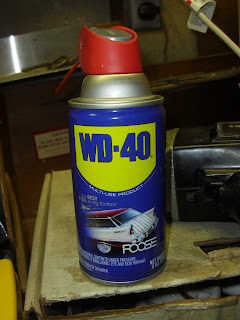 Last Friday, I decided, once again, to hang the bulletin board in the kitchen.   Drill, drill bits, key.  Zip, zap, zip, zap.  VOILA! 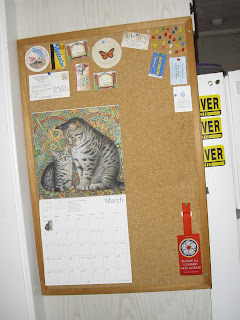 (Note that it's the picture that is crooked, not the bulletin board!)

When I told D#2 what I'd done, she asked, "Does this mean we are finally moved in?"   Guess it does, Sweetie, guess it does.