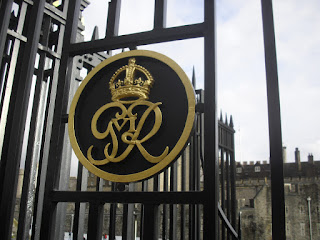 D#1 and BT (Brother Tom) were to arrive on Sunday morning, check in to the hotel, and meet D#2 and me at the Tower of London.  Though I had visited the Tower on my 2002 trip to London, I find it absolutely fascinating and highly "re-visitable".  There is so much history here!

I am a native Pennsylvanian, now living near Philadelphia.  I enjoy easy access to a range of places that date back to colonial days, back to the late 1600's when William Penn was given (as payment for a debt to his father) the area now known as Pennsylvania by Charles II of England.  But what seems so long ago at home seems so "just yesterday" when you are looking at the White Tower, whose construction was begun by William, the Conqueror, in the 11th century -- six hundred years earlier! 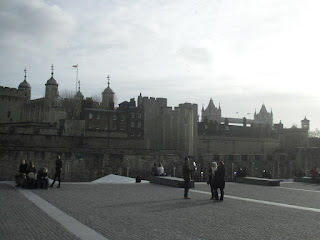 A visit to the Tower in 2012 was, in a number of way, different from a decade ago.  A section of the wall, not reachable at that time, has been opened to visitors. In this section, the visitor walks through rooms that were part of the Medieval Palace that was the Tower in the 13th century. 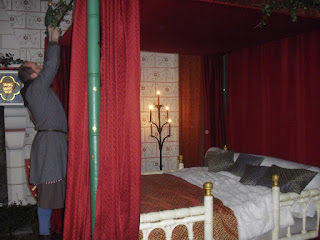 Several rooms are outfitted as they might have been at the time, and, in the royal bed-chamber, there were even costumed "interpreters" portraying Edward II and his wife, Isabella. 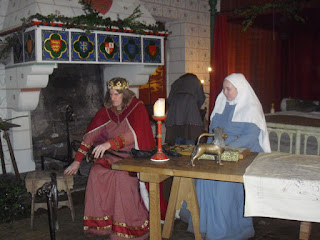 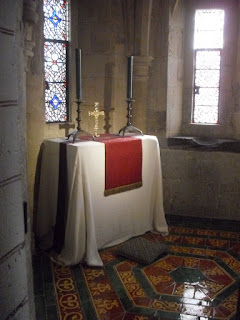 Just off the bed-chamber was this small chapel.

Another chapel area was cordoned off behind wooden walls.  On its floor is this plaque:
By Tradition
Henry III died here
May 21, 1471 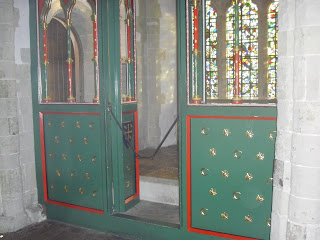 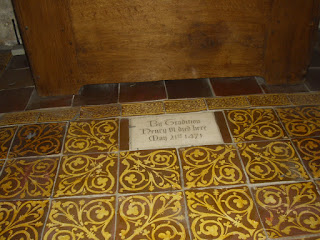 I
The White Tower, as it appeared for the few minutes of sunshine we had that day! 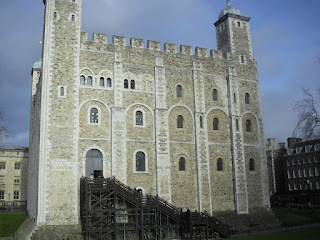 We lucked into the opportunity to watch the changing of the guard in front of the Waterloo Barracks, which is the building that houses the crown jewels. 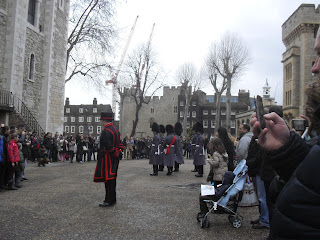 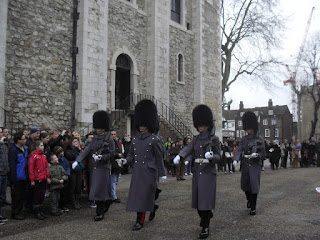 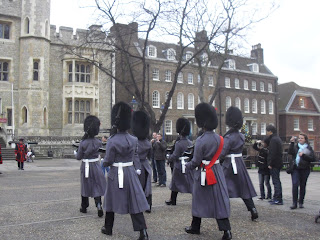 One of the most famous parts of the Tower complex is Tower Green, the site where Anne Boleyn and five others were executed.  Ten years ago, there was nothing there, other than a marker giving the names and dates, all within a chained square.  In 2006, a memorial was erected on the site. 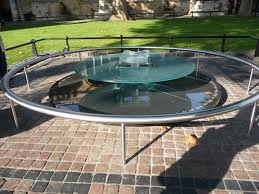 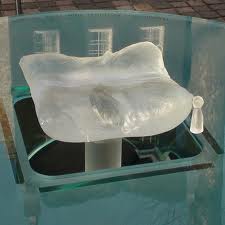 (not my photos)
The memorial has a poem inscribed around the lower circle, with the names of those executed written on the edge of the upper disc.  In the center is a glass pillow.

I did not like the memorial.  The Tower website says the goal was to provide "a focal point for contemplation, reflection, and remembrance"  In my opinion, the stark, unadorned marker, reading simply "This is the site where ... were executed" was more affecting.  The poem, the translucent blue-green glass, and the lovely shape of the pillow "prettify" the site inappropriately.  I also find the pillow both too literal and too distracting.  If not for the metal rail, I could envision cheeky youngsters (maybe "older-sters" too) having their pictures taken while bending over the pillow! 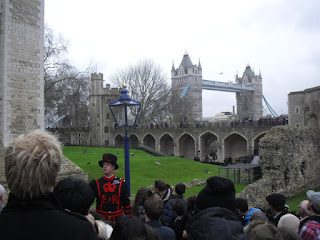 We caught up with the last of the tours led by the Yeoman Warders, the only way to gain entrance to the Chapel of St Peter ad Vincula, which I believe to be another highlight of the Tower.  (Look carefully and you'll see the cages that house the ravens that, by tradition, must always live at the Tower, or the country of England will fall.) 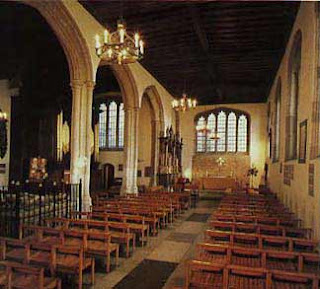 (also not my photo; you're not allowed to take pictures inside the Chapel)

The Royal Chapel was the burial place for the headless bodies of Anne Boleyn, Lady Jane Grey, and Catherine Howard (three Queens of England) and Sir Thomas More.  They lay here in unmarked graves, from the mid-1500s until the mid-20th century when, with the sponsorship of the Queen Mother, the Chapel was refurbished.  During that project, the bodies were re-interred with appropriate markers in the chancel area of the Chapel.   In this place, the sacredness is palpable, along with desolation and sadness.

The  Wikipedia entry for the Chapel quotes Thomas Babington Macaulay's 1848 History of England: "In truth there is no sadder spot on the earth than that little cemetery.  Death is there associated, not, as in Westminster Abbey and Saint Paul's, with genius and virtue, with public veneration and with imperishable renown; not, as in our humblest churches and churchyards, with everything that is most endearing in social and domestic charities; but with whatever is darkest in human nature and in human destiny, with the savage triumph of implacable enemies, with the inconstancy, the ingratitude, the cowardice of friends, with all the miseries of fallen greatness and of blighted fame.  Thither have been carried, through successive ages, by the rude hands of gaolers, without one mourner following, the bleeding relics of men who had been the captains of armies, the leaders of parties, the oracles of senates, and the ornaments of courts." 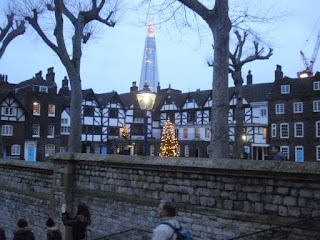 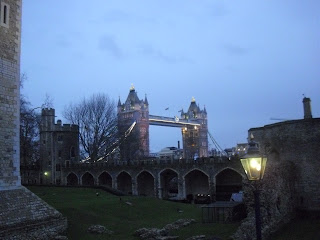 These half-timbered buildings are the official residences of various Tower officials.  The skyscraper in the background is called "The Shard" -- for obvious reasons.

A view of Tower Bridge as the sun was going down -- quite early in late December. 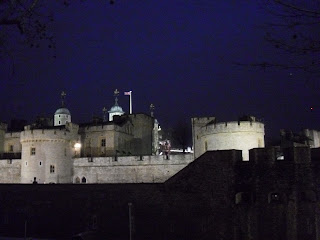 The Tower by night from the walk to Tower Bridge. 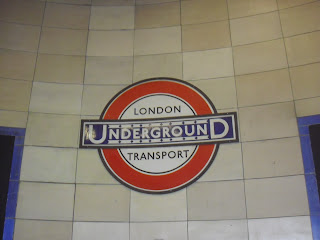 We took the Tube to the Mile End stop, showed D#1 and BT around Queen Mary.  (Did I mention that Olympic Stadium was visible from D#2's room!?).  We met D#2's friend Stephen (FS) and all then off to Brick Lane where we dined on delicious Indian food!    Another Tube ride back to the hotel, where everyone was glad to crash after a busy day!