Boxing Day (December 26th) dawned, not unexpectedly, gray and dreary again.  On this day, public transportation was limited, but not absent, which slowed us only slightly as we were by now used to walking fair distances and were, fortunately, within a hike of much of the central city.  Our primary destination for the day was St. Paul's Cathedral, for many, itself the symbol of London.

The view as approached from the Millennium Bridge: 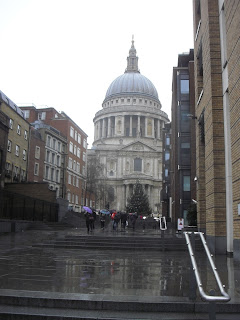 A large evergreen had been hung with weather-resistant decorations, marking the season. 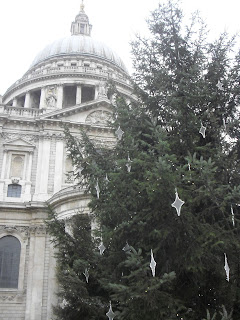 In front of the entrance stands a statue of Queen Anne, the reigning monarch when the Cathedral was completed. 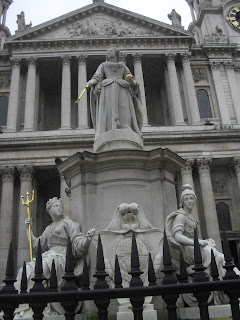 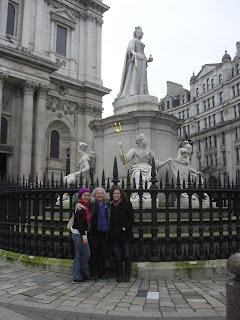 In keeping with my promise to D#2 to allow my picture to be taken whenever we visited a church, here I am with both daughters in front of St. Paul's. 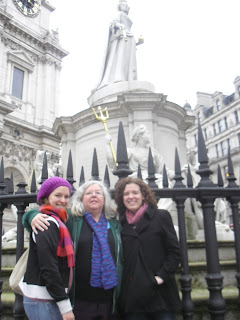 I don't seem to have any photos of the interior, so I can only presume that photography was not allowed.   We explored the beautiful sanctuary on the main floor, with its mosaics, sculptures, and other art work (both old and quite modern), then climbed to the Whispering Gallery, which we (of course) tested to see if "it" worked.  ("It" did.)  From there, we ascended a long, tight, winding set of stairs to the "Stone Gallery", the highest outdoor viewing area that was open that day.  I confess it took me some time -- and several stops to catch my breath -- but I made it!   The bullet-shaped building just left of center in the photo below is one of the newer additions to the London skyline and is nicknamed the "Gherkin."  Need you ask why? 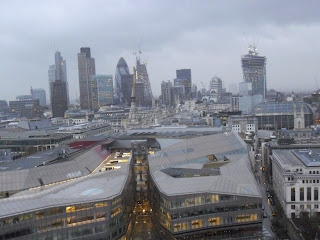 The triangle piercing the sky is another skyscraper, this one called, quite simply, the "Shard". 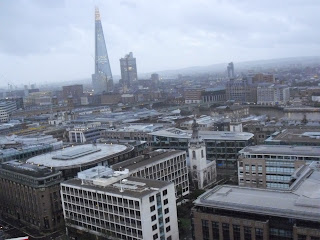 In the distance you can see the circle of the London Eye, which we did not get to experience, in spite of discussion both of whether it was worth the cost and whether or not some of us (me) could deal with the height!   We never actually made a decision, but simply ran out of time slots in which to plan a "ride." 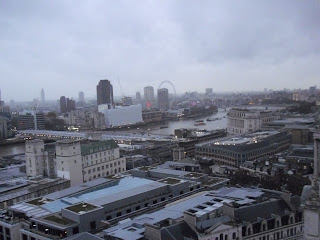 As with so many London churches, the undercroft area contained crypts and burial places, and, as one might expect because of the history and importance of St. Paul's, it was the resting place of many notables, including poet John Donne (For Whom the Bell Tolls), Christopher Wren (architect of medieval London), as well as military leaders, the Duke of Wellington and Horatio, Lord Nelson.  We were among the last to leave the cathedral, and I believe I still missed seeing some of the lower areas.

Night had fallen when we worked our way back past the cathedral on our way to the evening's entertainment. 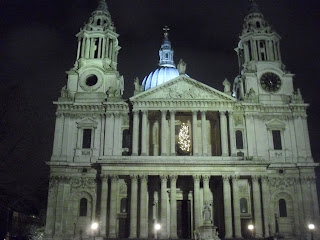 Daughters had been up bright and early to try for student "rush" tickets to the hottest musical around.  Sold out for every performance, the theatre sold a handful of tickets to those with student ID's for a pittance -- I think it was around 10 pounds ($15 or so).   I doubted if they'd succeed -- after all, all the local students were home for the holidays, not to mention any visiting.  I was wrong.  They scored two of the scarce prizes.   Off they went to see "Matilda" -- especially appropriate since this was one of D#1's favorite books as a youngster and they'd both watched the movie multiple times on our VHS player. 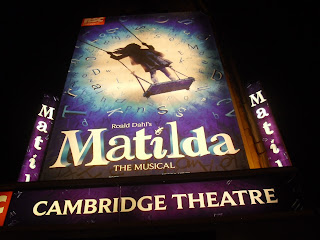 D#2's BF was staying in Cambridge for the holidays, as his parents now live there, so he had taken the train into London to explore with us several times.  He was staying over that night, so he, Brother Tom, and I went on a London Walks tour, exploring the sites connected with Jack the Ripper, a subject I'd been fascinated with for many years!   Almost nothing of Jack's day remains other than an open court area, but we walked in his footsteps, or in the path his carriage took, if, in fact, he traveled by carriage.... Walking back to our hotel from the Tower Hill tube stop where our tour ended, we had a nighttime view of the lit-up Tower of London. 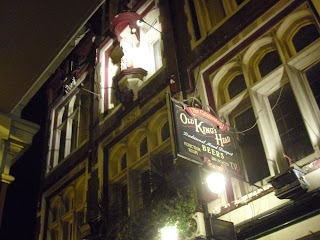 Of course, we took a few minutes to stop in a pub on the way back to the hotel, and raise a pint to quench our thirst!