Thursday Brother Tom had an early flight home and D#2 stayed in our flat to work on a paper (due electronically shortly after the new year) and meet a friend who was coming in from Amsterdam, where she had studied for the past semester.  D#1, her BF, and I grabbed a double-decker bus and rode off to visit to Westminster Abbey, followed by a train ride to Cambridge to visit with D#1's BF's parents who now live there.

The chill, damp weather is almost visible in the photo I snapped of the nearby Parliament building with Big Ben. 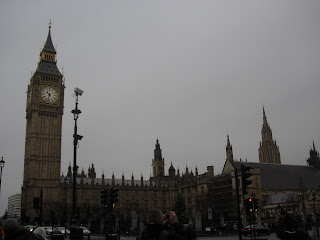 When I'd been here ten years ago, the Abbey had closed early for some event.  Even without this glitch, there is so much to see in this palpably sacred place that I was eager to spend some more time there, taking advantage of the now-available audio tour that ensured I missed none of the most important places, though I augmented the tour with plenty of just wandering about. 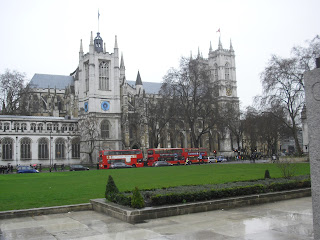 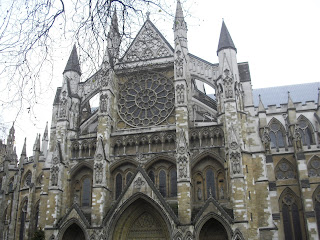 Looking through the ironwork fence: 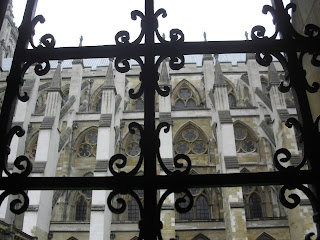 Of course, I had to take a photo of the door leading to the "Librarian and Keeper of Muniments": 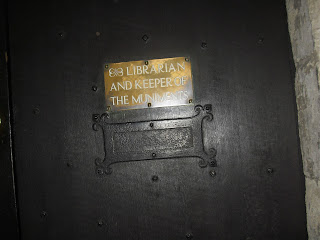 The statues above the Great West Door of the Abbey are of 20th century martyrs, including Dr. Martin Luther King Jr., Oscar Romero, and Dietrich Bonhoeffer. 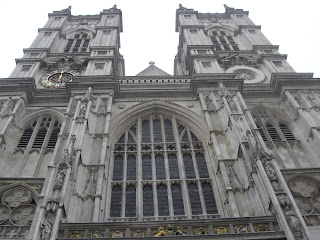 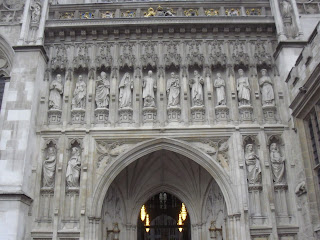 At my request, D#1 and BF had headed off to the train station and Cambridge without me, as I was feeling quite sick by then.  By the time I left the Abbey some of the clouds had cleared and, looking toward Big Ben, the London Eye was visible. 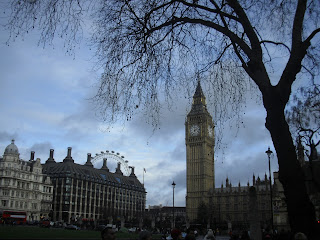 Taking my time walking back to our flat, I enjoyed the sights and sounds of this incredible city, with the "Shard" prominent in the skyline. 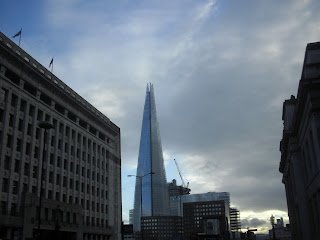 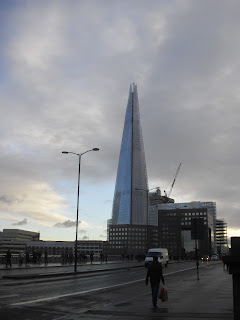 While the chill and damp had been ever-present during the trip, it was never really cold, so many places had blooming flowers.  I loved these pansies in window boxes outside a shop. 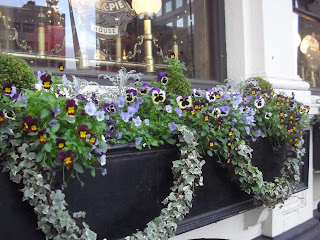 On Christmas Eve day, I had not joined the others on their excursion to Borough Market, but now I found myself nearby and happily discovered that many of the shops were open!   Had a lovely time poking around, buying a few things here and there -- including some yummy chicken curry that I had for dinner. 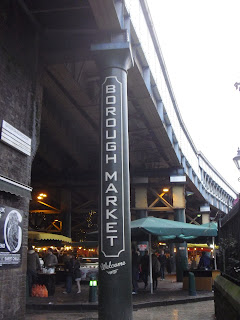 Tucked it all into a great Borough Market reinforced burlap shopping bag that is now my first choice "go to" bag for my grocery shopping here at home. 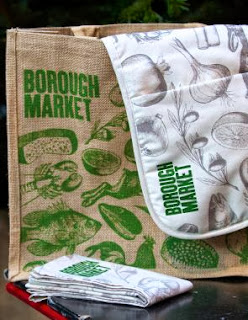 An earlier screw-up on my part had meant that a planned Friday outing to the Victoria and Albert Museum with quilter-friend Judi of Canterbury had been cancelled.   Turns out it was just as well.  Friday I was sick.  Really sick.  Coughing-and-hacking-and-not-breathing-very-well sick.  There was nothing I could do but stay in the flat, rest, and start packing for the early Saturday morning trip to the airport.  However, through email, Judi had passed on enticing information from her husband that our flat was very close to London's last galleried coach inn, which was frequented by the likes of not only Charles Dickens but William Shakespeare himself!   So Friday evening, we four set off to find it!

As with so many places in London, when you look around a corner, there are wonderful surprises to be found.  That's how we discovered "The George Inn." 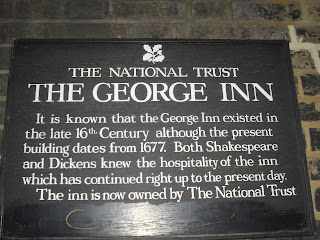 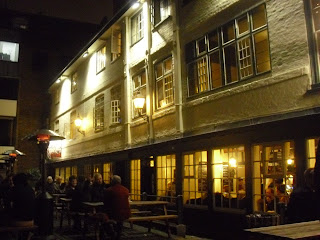 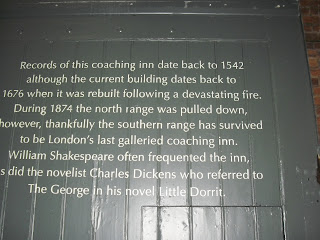 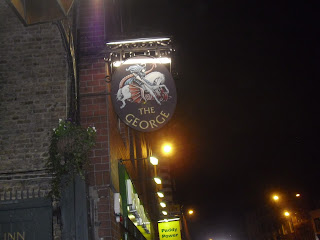 We could only wander into the courtyard, as the Inn was booked for a private party, alas.  Some months later, I was able to return the favor by emailing Judi that the book, Shakespeare's Pub had been recently published in case her husband was interested.

Saturday morning came, and meant that D#1 and I had to be on our way to Heathrow.   D#2 and her classmate were going back to her flat at Queen Mary where they would meet my "German daughter" who had arrived in London the night before.   They planned to see in the new year together and go their separate ways early on New Year's Day, with D#2 and friend stopping over in Paris (sigh!) for two days, and arriving back in the states later that week.

I was, predictably, sad to leave London.  In two trips there -- a decade apart -- I still had not visited a single palace!   And my museum time had been limited to half an hour or so at the National Gallery on the Friday I arrived!   Even so, we had managed to enjoy a number of activities in the available time, without rushing through them, which left me no regrets!

I suppose I will have to return one day.  The next time I go to London, it will be in nicer weather, especially because I want to attend at least one production at Shakespeare's Globe, to visit Hampton Court Palace (D#2's favorite), to see the V&A (at least), to see London from the Eye (maybe), to take the train to Cambridge to see the Corpus Clock, and, perhaps, to visit friend Judi in Canterbury, with its historic cathedral.

Can't be too soon for me.