Given it took me almost an entire year to finish writing about my London travels with my daughters, I am now way behind in posting about any other 2013 events.  Simple neglect does account for some of my tardiness, but also, because of a medical condition, I have had to limit my computer time.  Given that I must spend most of my job time staring at a monitor, this means I often go days without even turning on the one at home.  Makes it kinda difficult to "keep up" with my recreational use (so to speak).

Decided I'd devote a few posts to the rest of 2013, add another photo-heavy W.I.B.W.O. piece, then try to get back on track with more frequent (if less lengthy) entries.

January 2013, Washington, DC
President Barak Obama was inaugurated for his second term.  (Was it really just ONE year ago?  It seems so much longer ago than a mere 12 months!)   D#1 got tickets for us to attend the inauguration so off I went to Washington DC to spend time with her and see this historic event.

The day before the ceremony, we visited the Old Post Office, a lovely Romanesque building, which had been converted to business and commercial space. 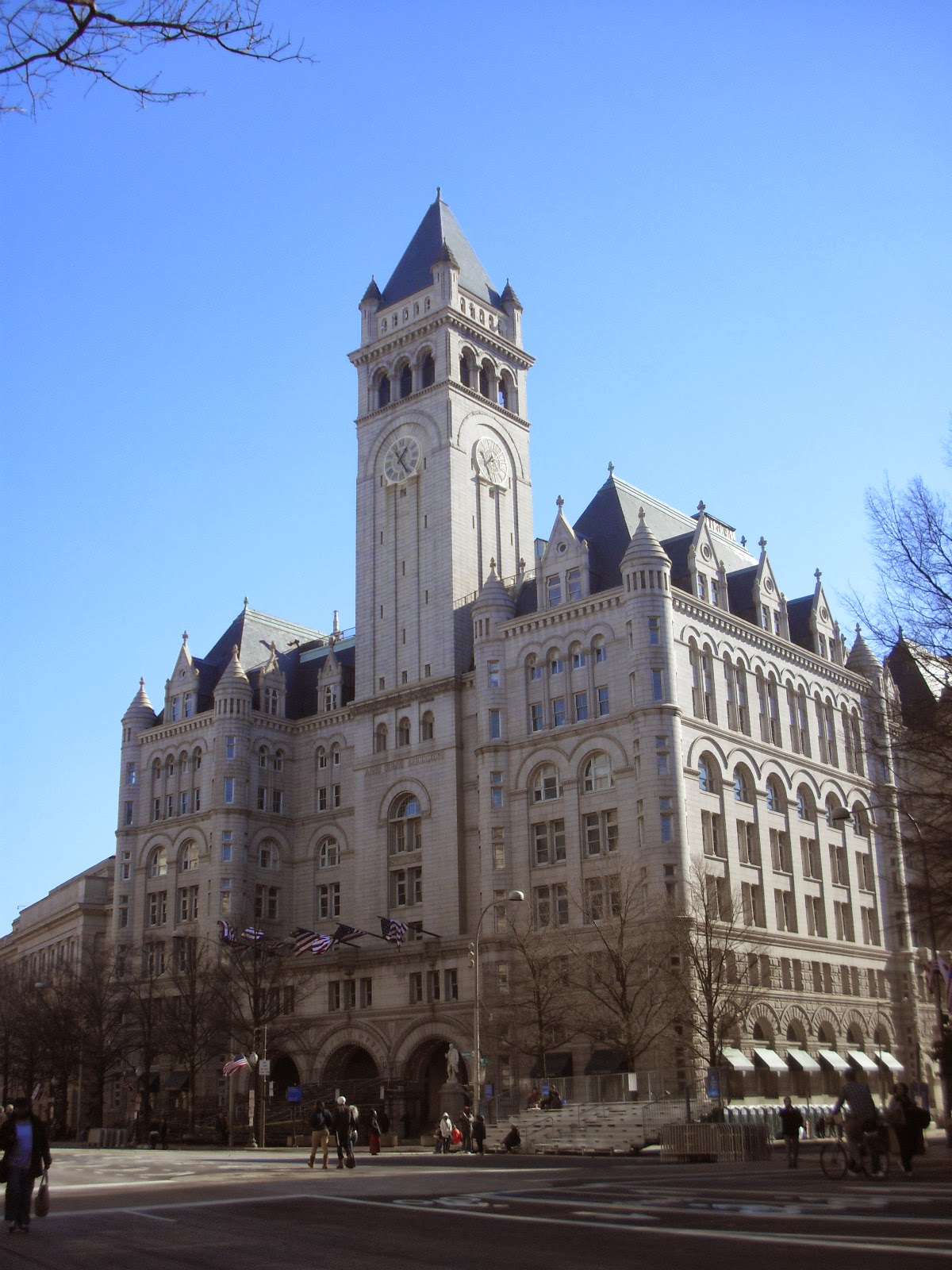 The inside reminded me of The Bourse in Philadelphia, with its balcony of retail and food service circling the floor space and a dozen or so floors of offices surrounding the open central court before being topped off by a ceiling many, many feet above! 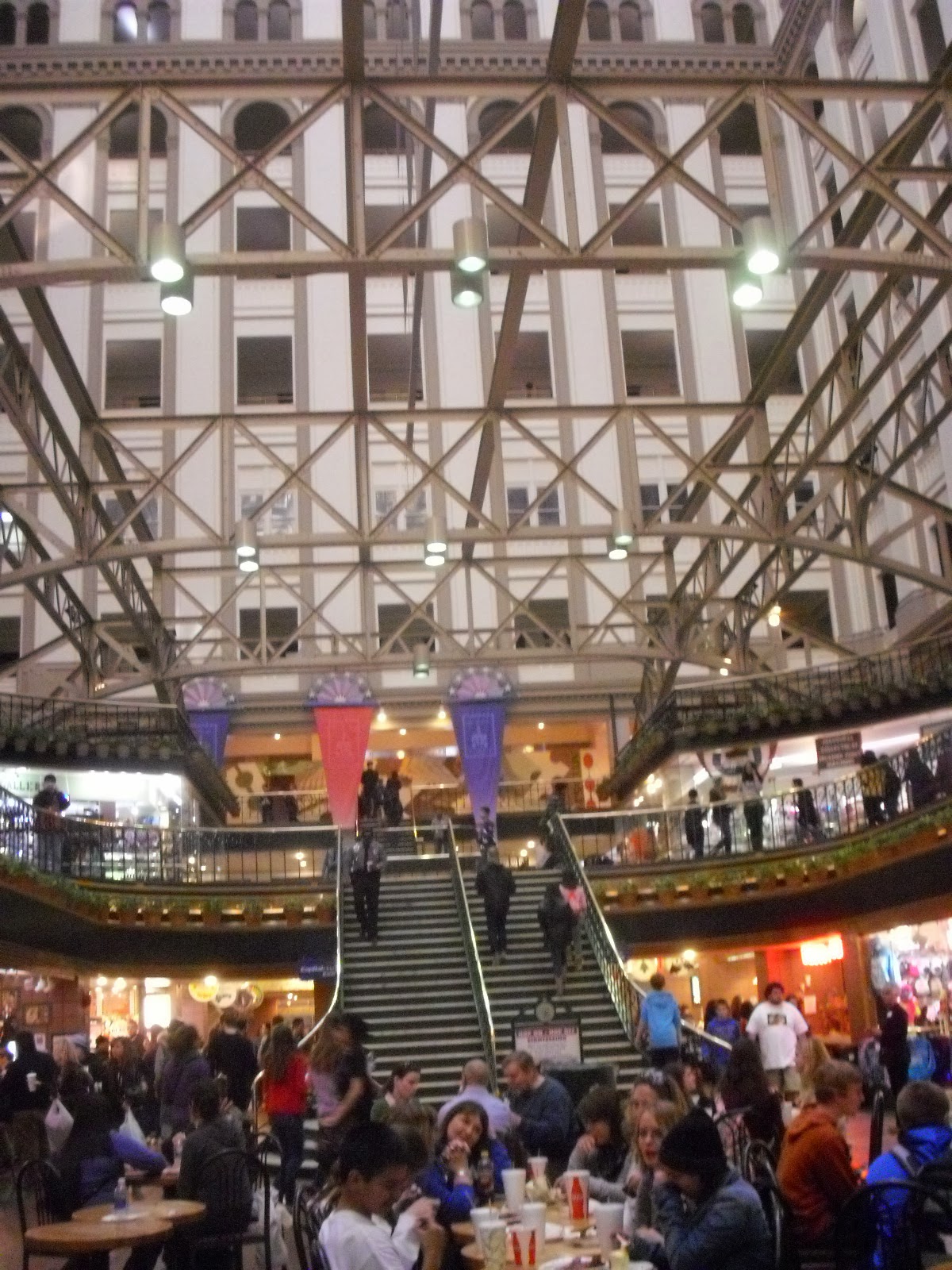 The tower on the building gives an amazing view of the city -- second only to the Washington Monument. 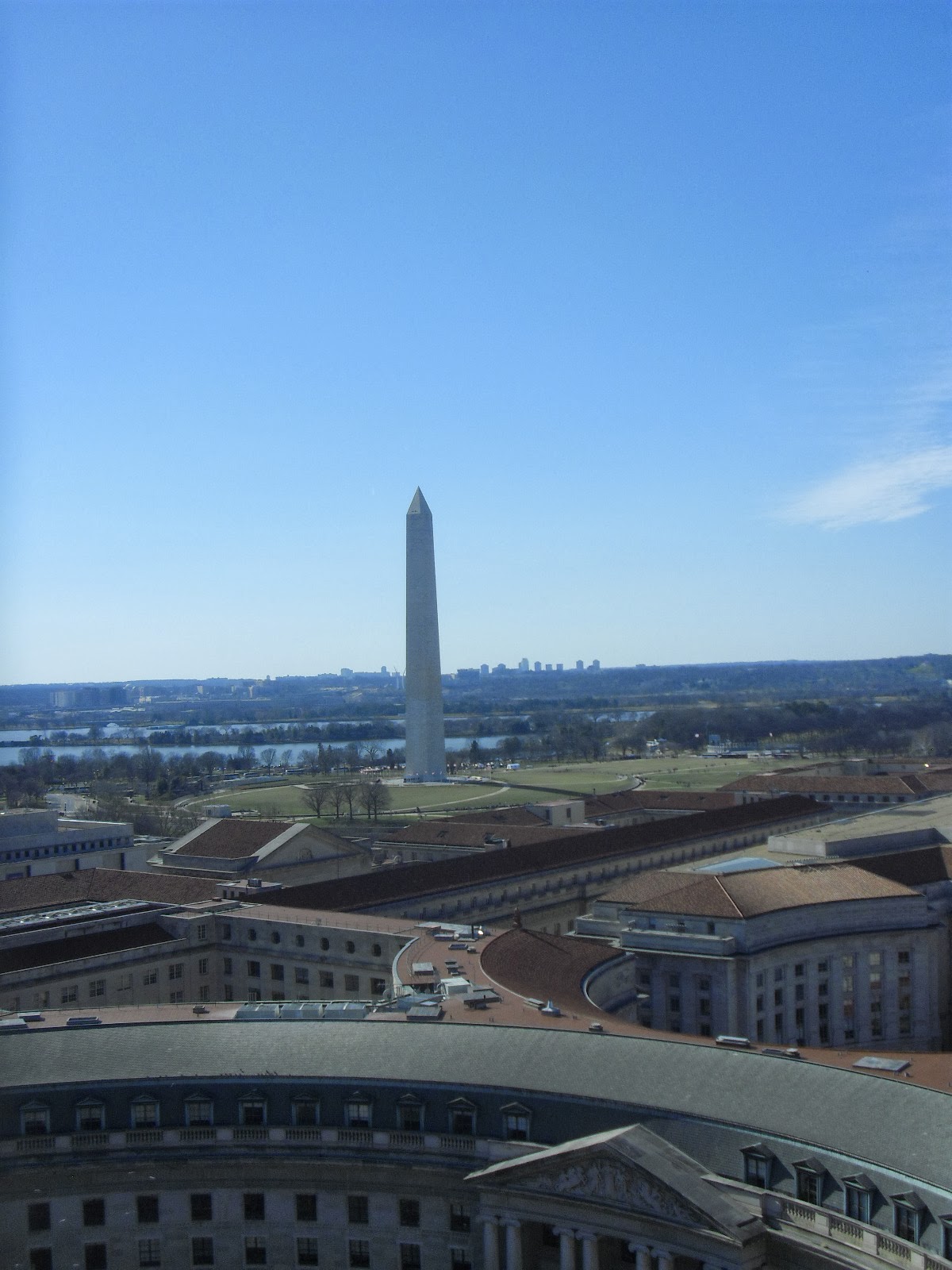 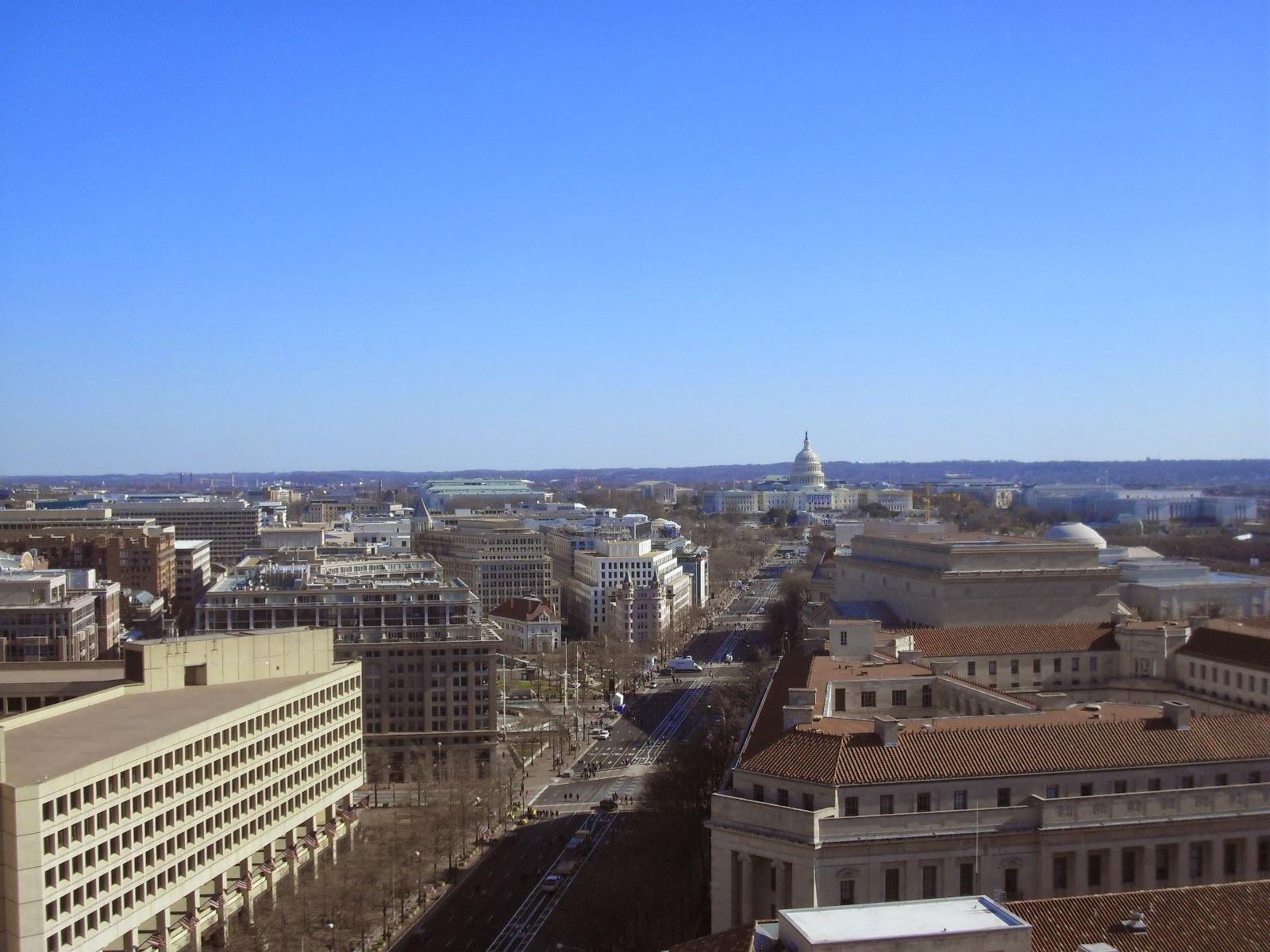 Note the almost empty street leading to the Capitol building.  That's Pennsylvania Avenue -- already cleared of most traffic and blocked off for the next day's parade.  We walked down this now-pedestrian walkway, passing the stand where the presidential party would watch. 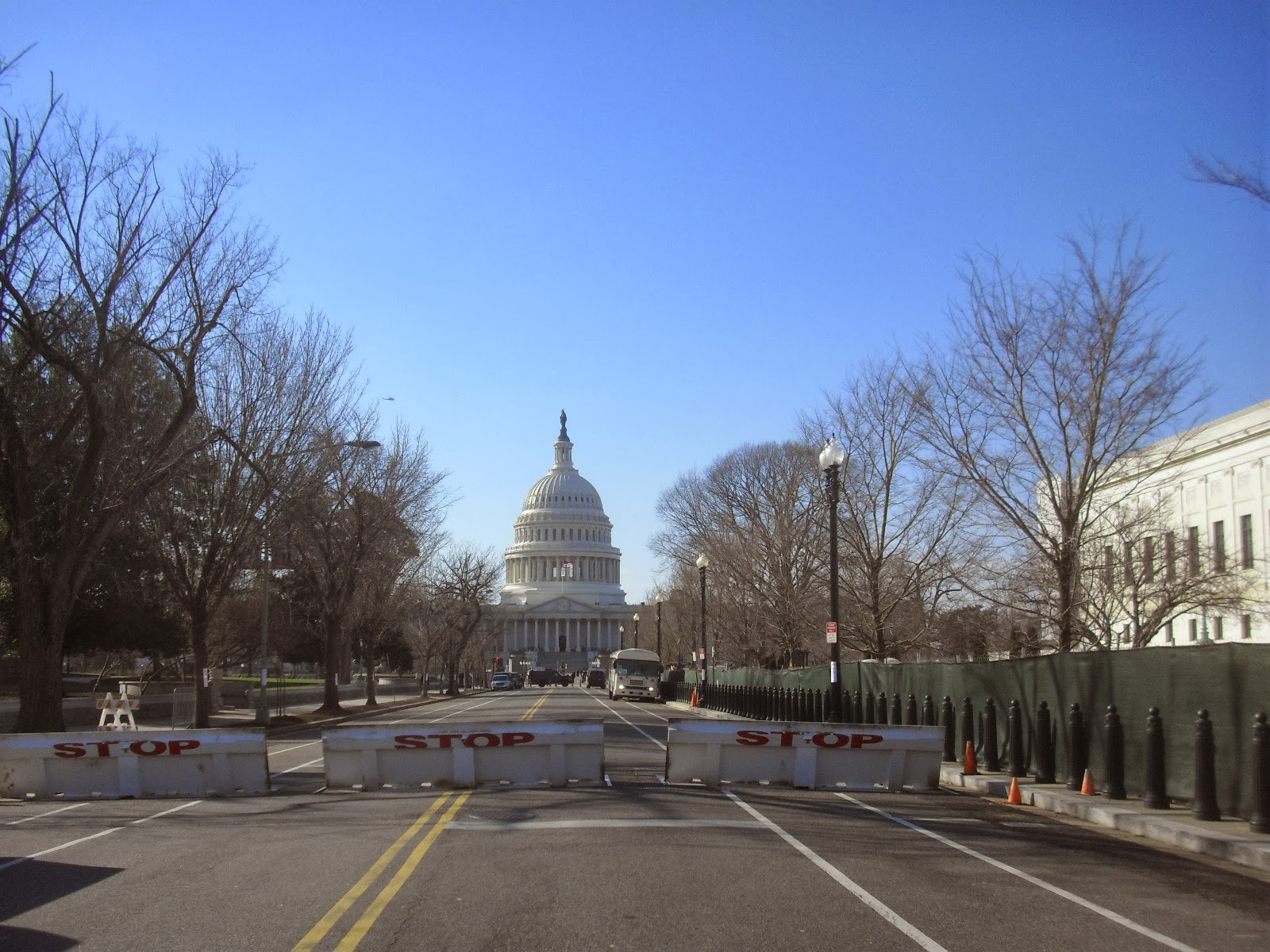 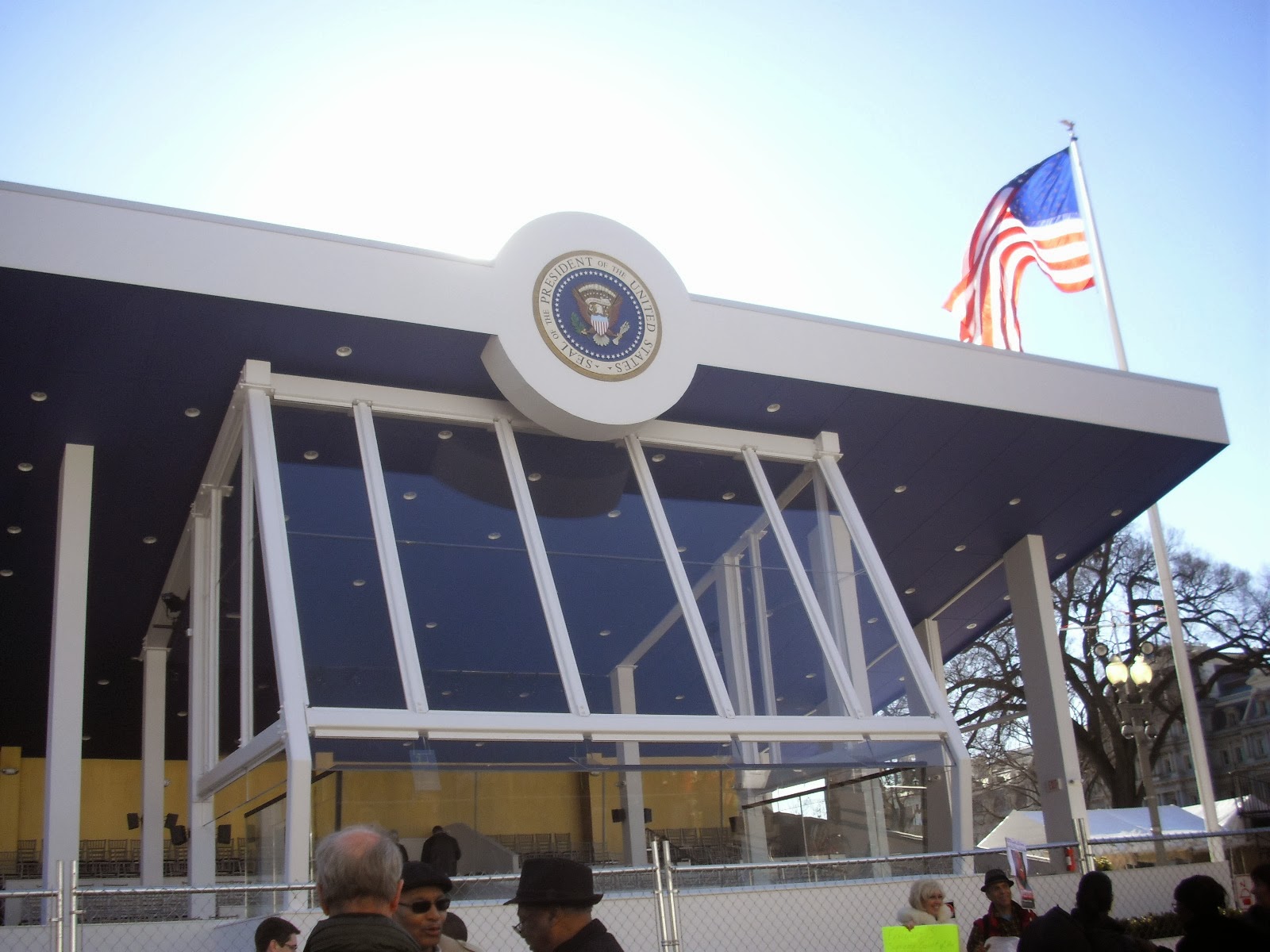 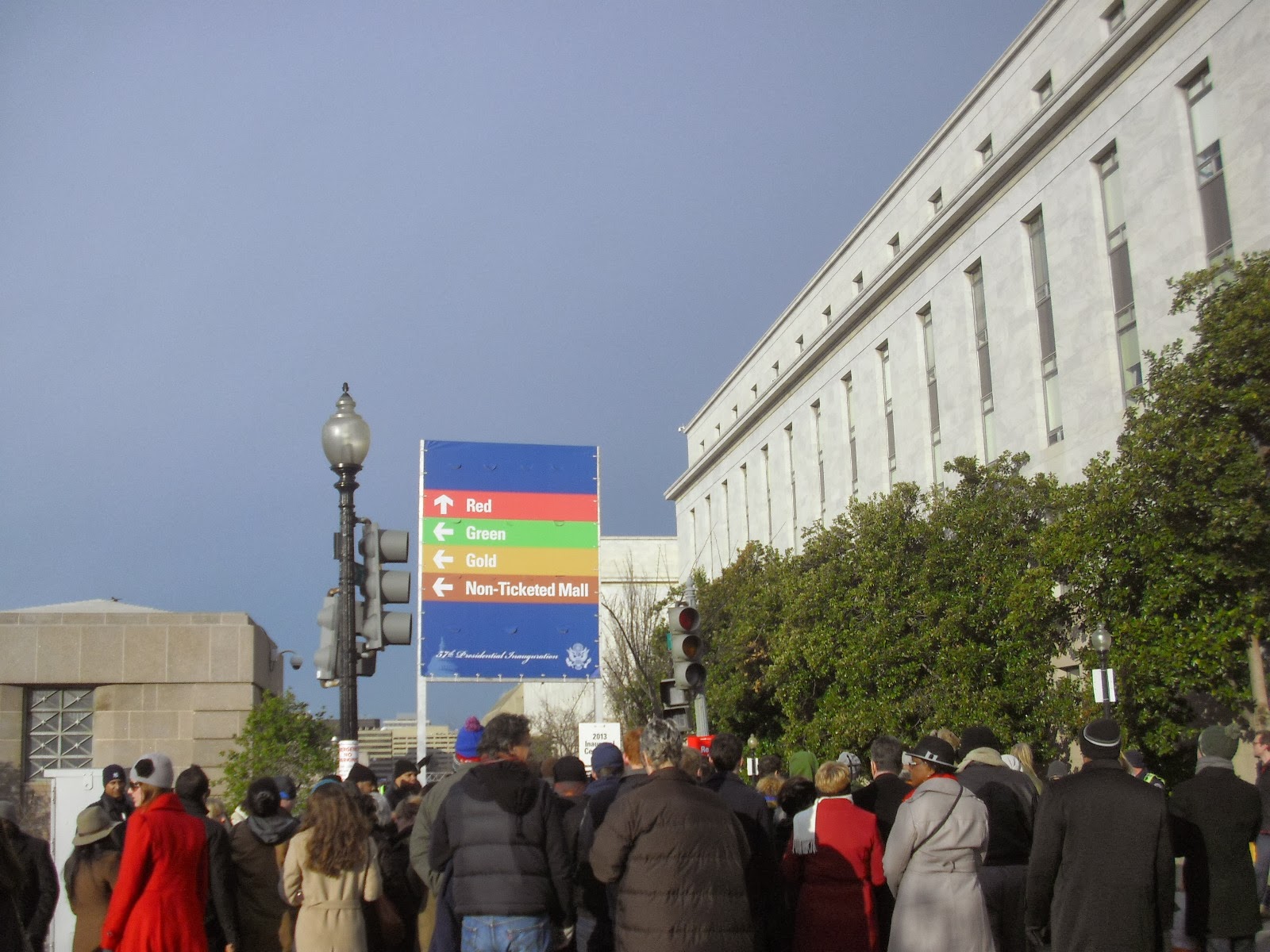 On the cold and gray morning of the inauguration, we joined the crowds as we searched for the section where our tickets said we should be. 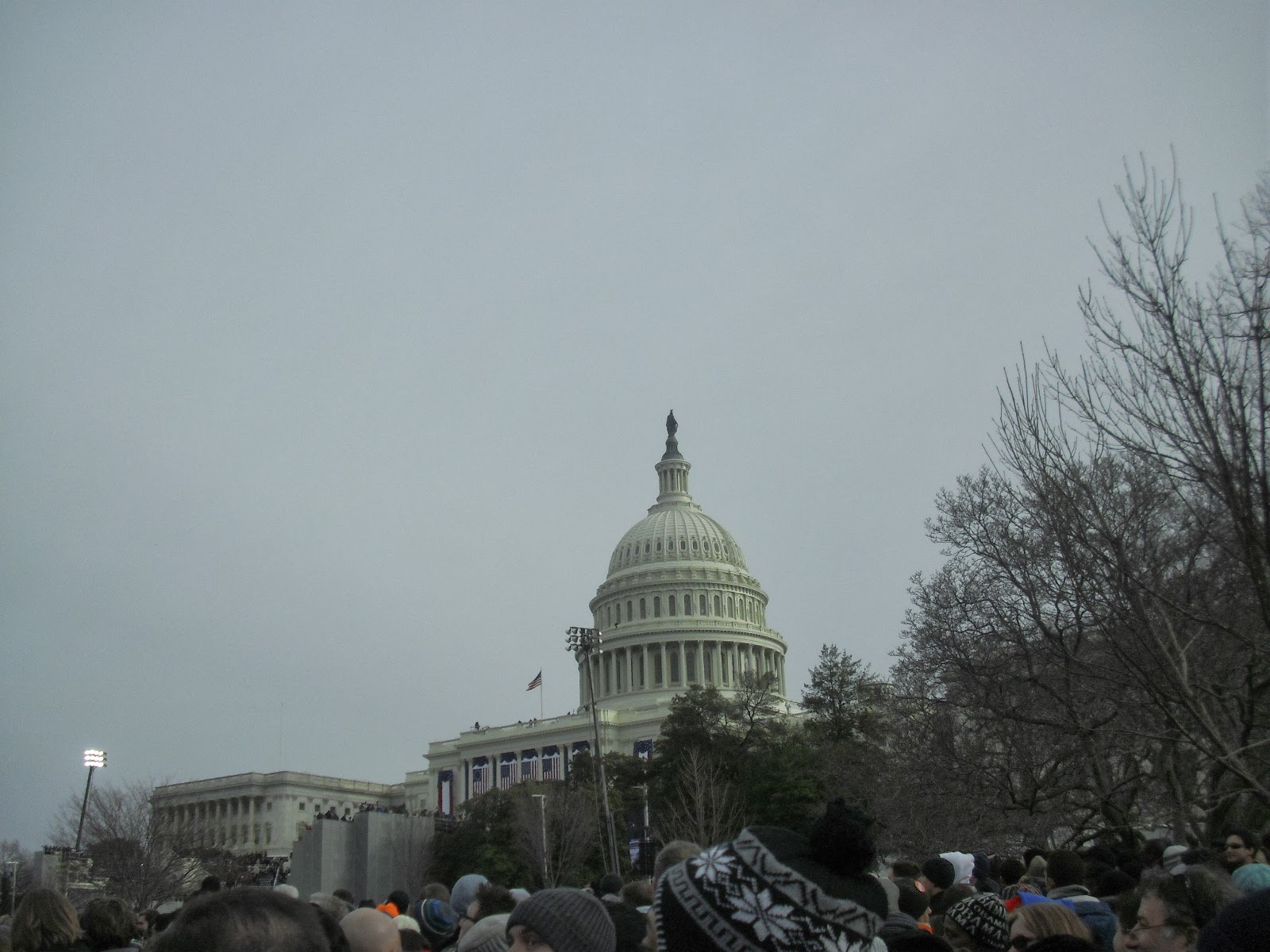 We had a decent view of the Capitol dome, but, alas,  couldn't see anything, not even the few "jumbotron" screens that were set up around the area.

Even so, it was exciting to hear the speakers, and know that we were experiencing a small part of history. 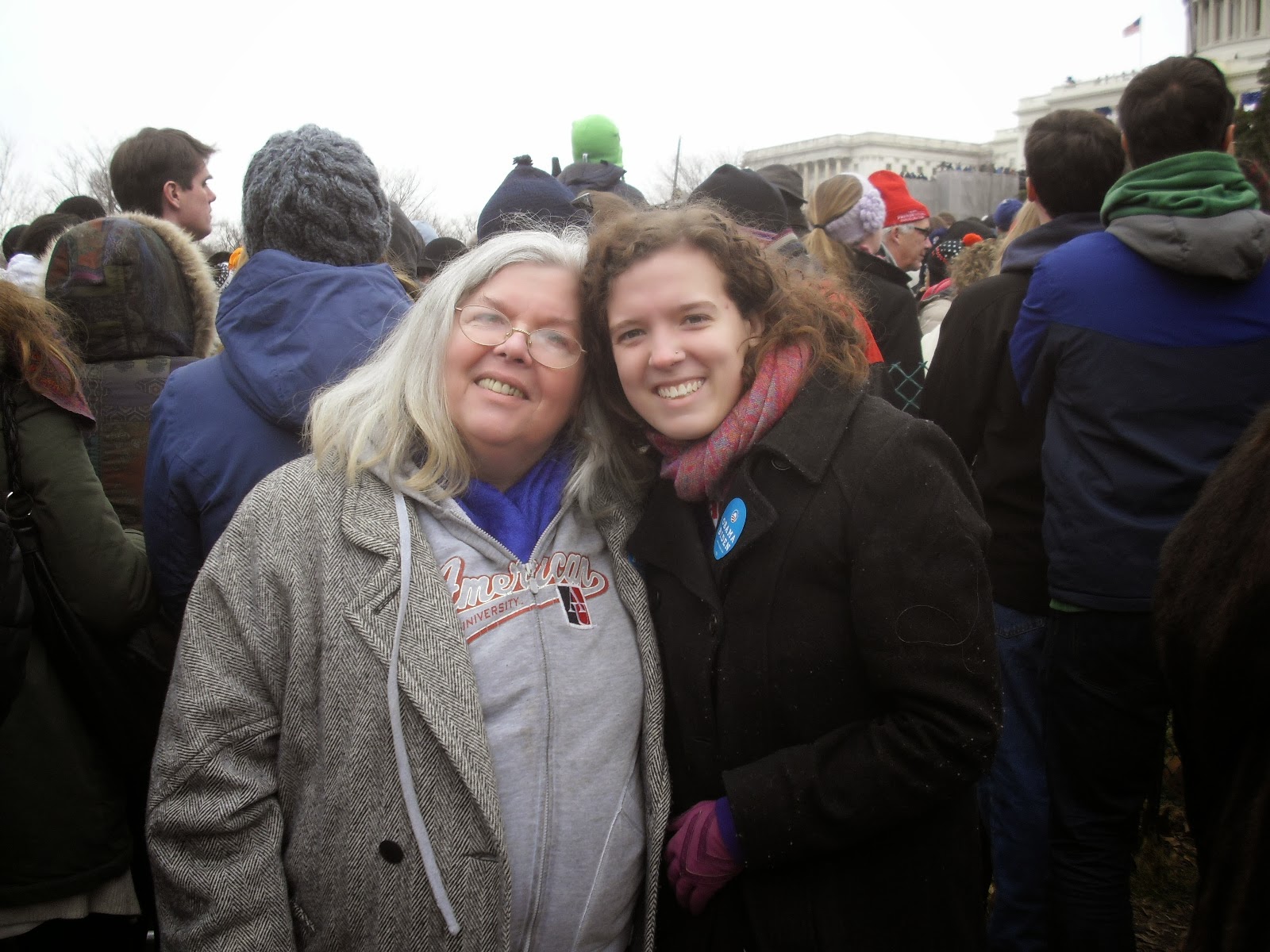 When the ceremony was over, our feet were frozen from standing on the cold ground and we knew that the Metro would be jammed for hours.  Hunger led us to walk a fair distance to find a restaurant that was open but didn't have miles of waiting customers.   A warm lunch fortified us to return to D#1's apartment and get ready to attend the HRC inaugural ball as she'd been given tickets through her job!   This ball was THE place for LGBT Washingtonians (and others) to be that night. 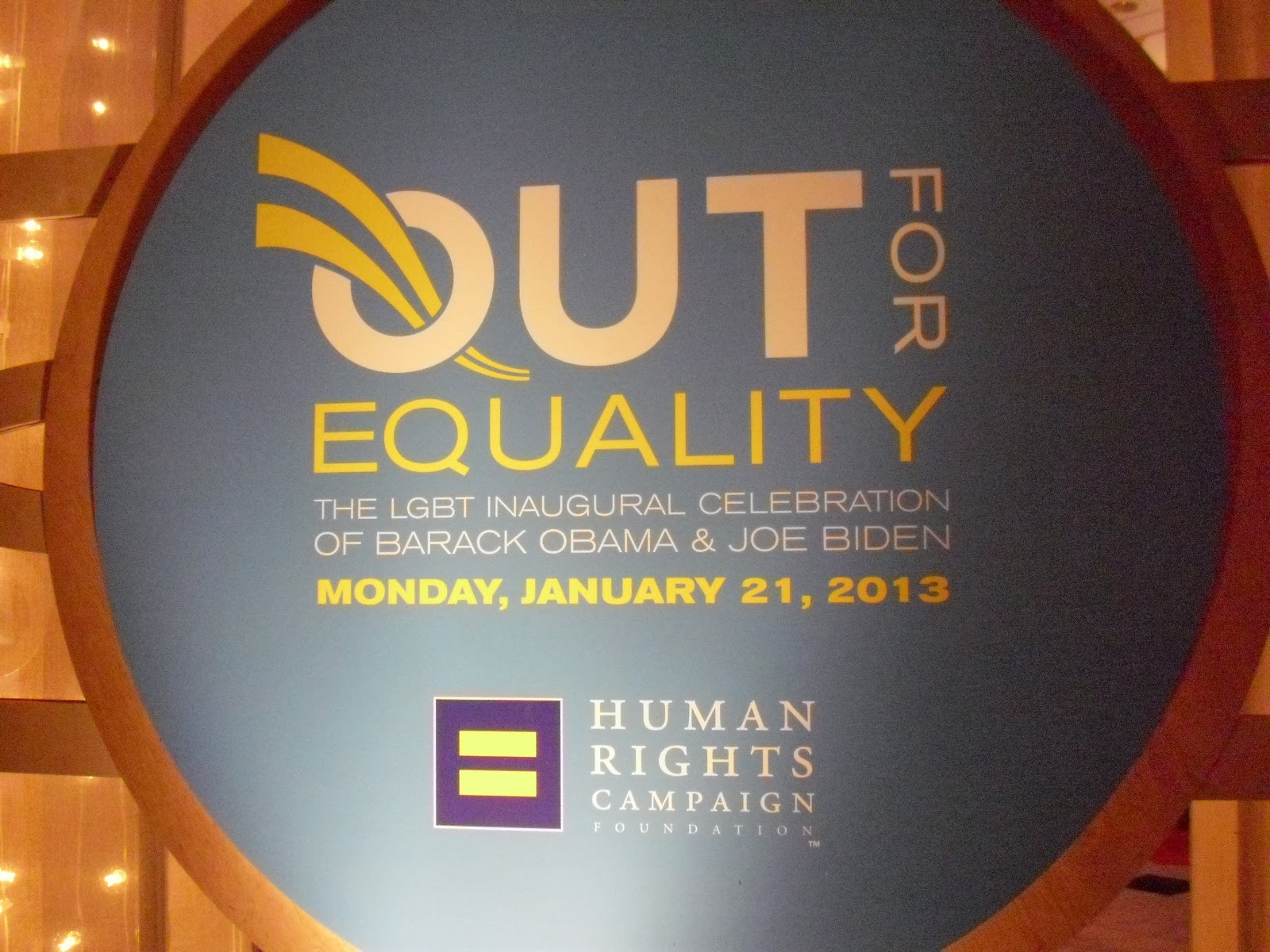 Many thanks to my generous daughter who invited me to share these times with her!

January 2013: Seattle, Washington
The Mid-winter conference of the American Library Association took me to Seattle, a place I'd visited once before (for the same conference) in January 2007.  That trip was the last one before my life took a couple of turns for the worse because of family "stuff."  Six years later, with all the "stuff" in my rear-view mirror, I looked forward to exploring this city on my own.  D#1's BoyFriend spent much of his life in Seattle, and provided valuable tips on where to go and how to get there.  As is typical for a conference visit, I had few opportunities to see much other than the conference and, perhaps, a restaurant or two.  But, thanks to her BF, getting around was a snap! 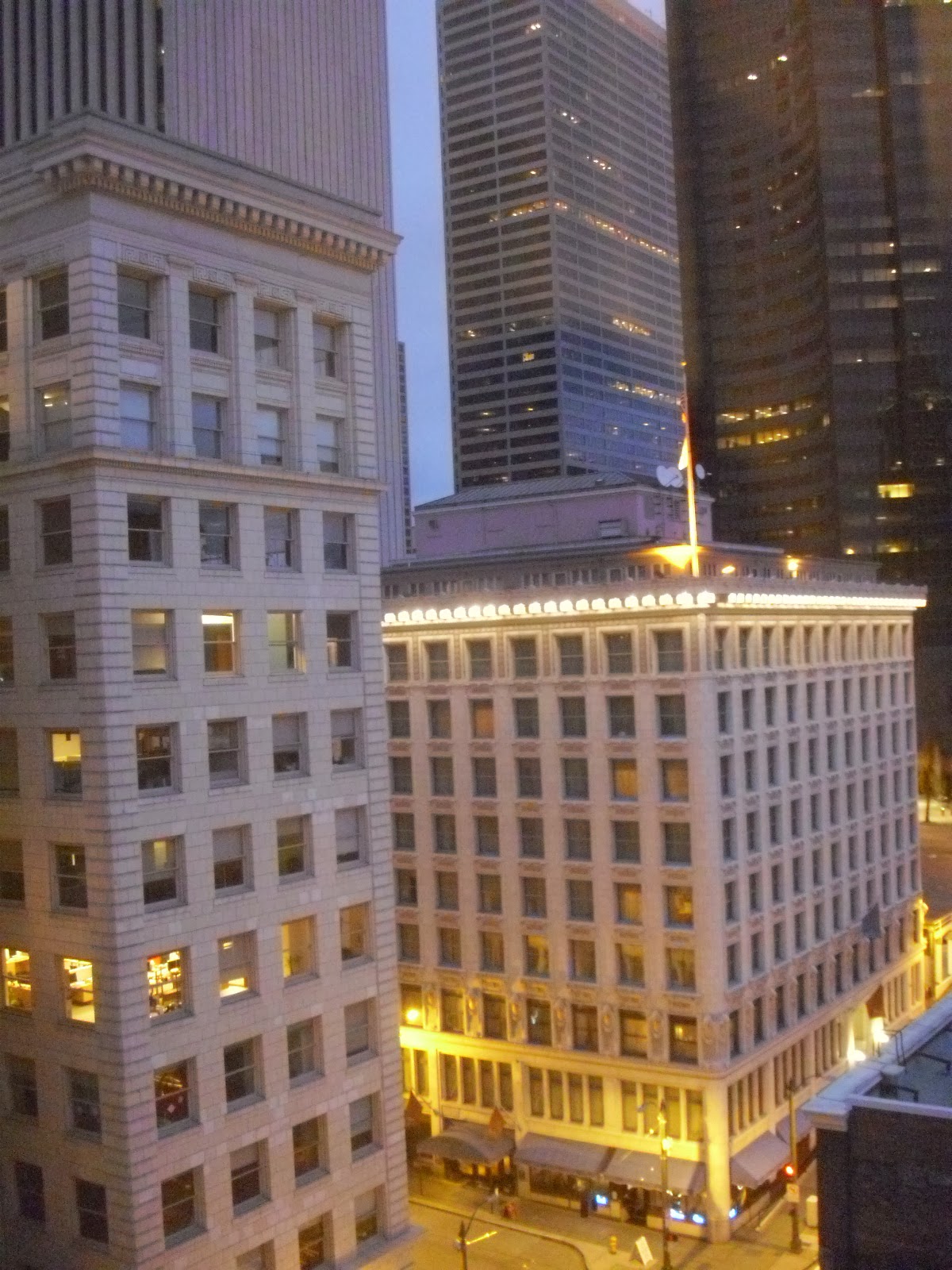 My hotel was near Pioneer Square -- a place I remember visiting previously -- but off the beaten track for conference-goers.  This historic area has many older buildings, as well as a wonderful   mystery bookstore, which was closed during the hours I wasn't working (un)fortunately. 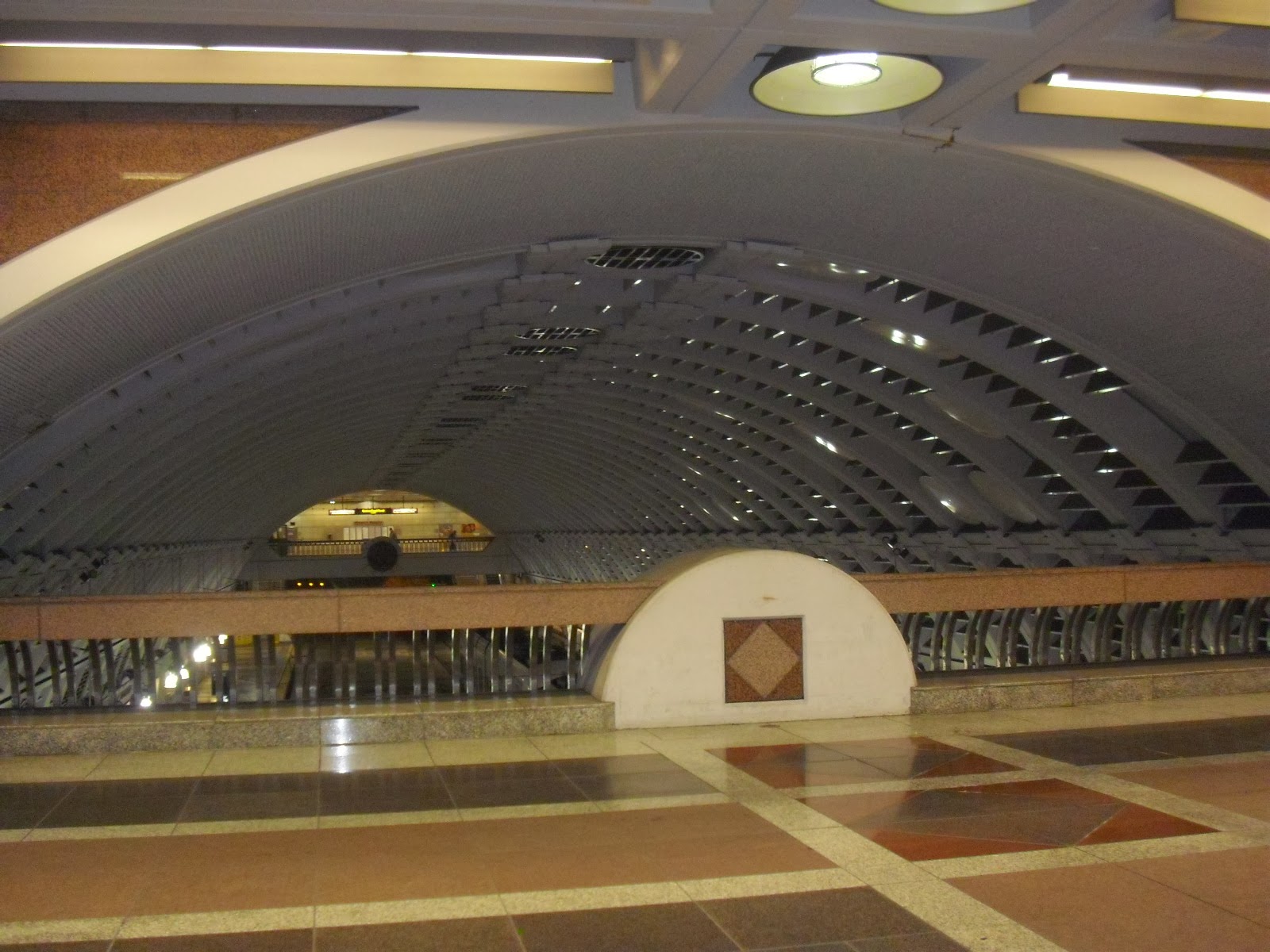 A short block away was a tunnel limited to bus and light rail which took me within a block of the convention center!


The walls of the stops visually expressed where you were: brick and limestone at Pioneer Square, Asian origami-type art at the International District stop, and colorful entertainment-oriented murals at the center of town, with its theatres and music venues. 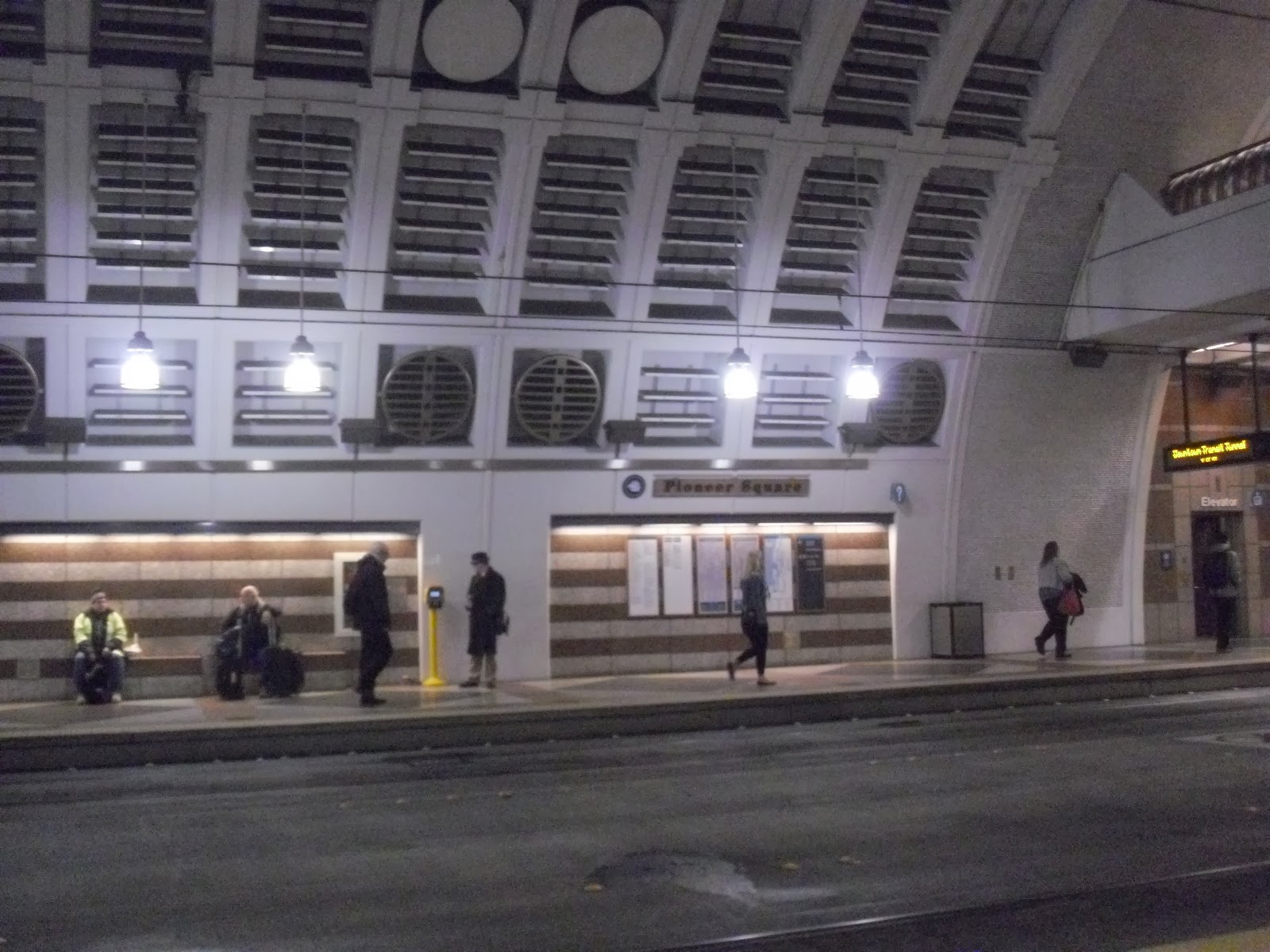 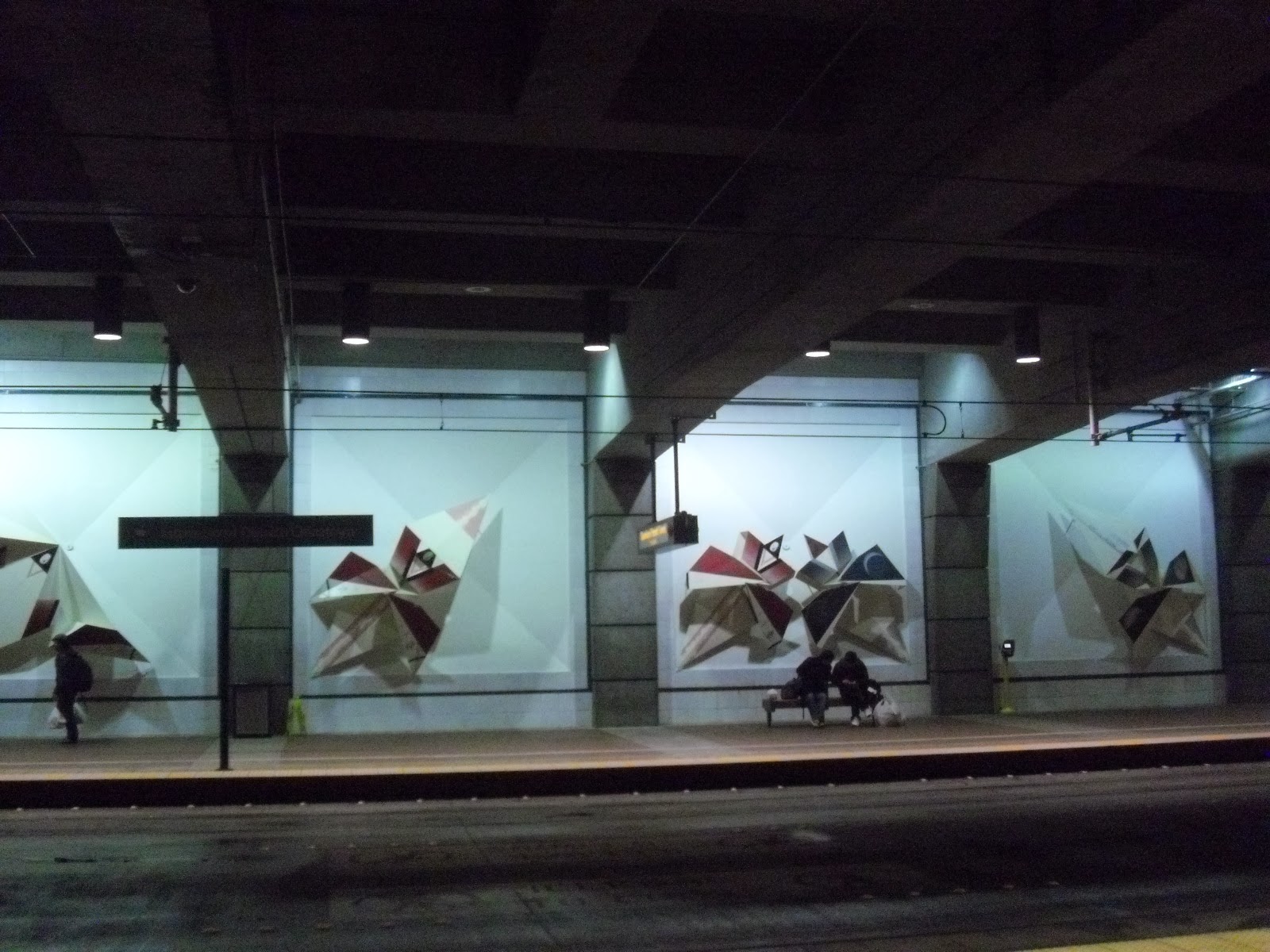 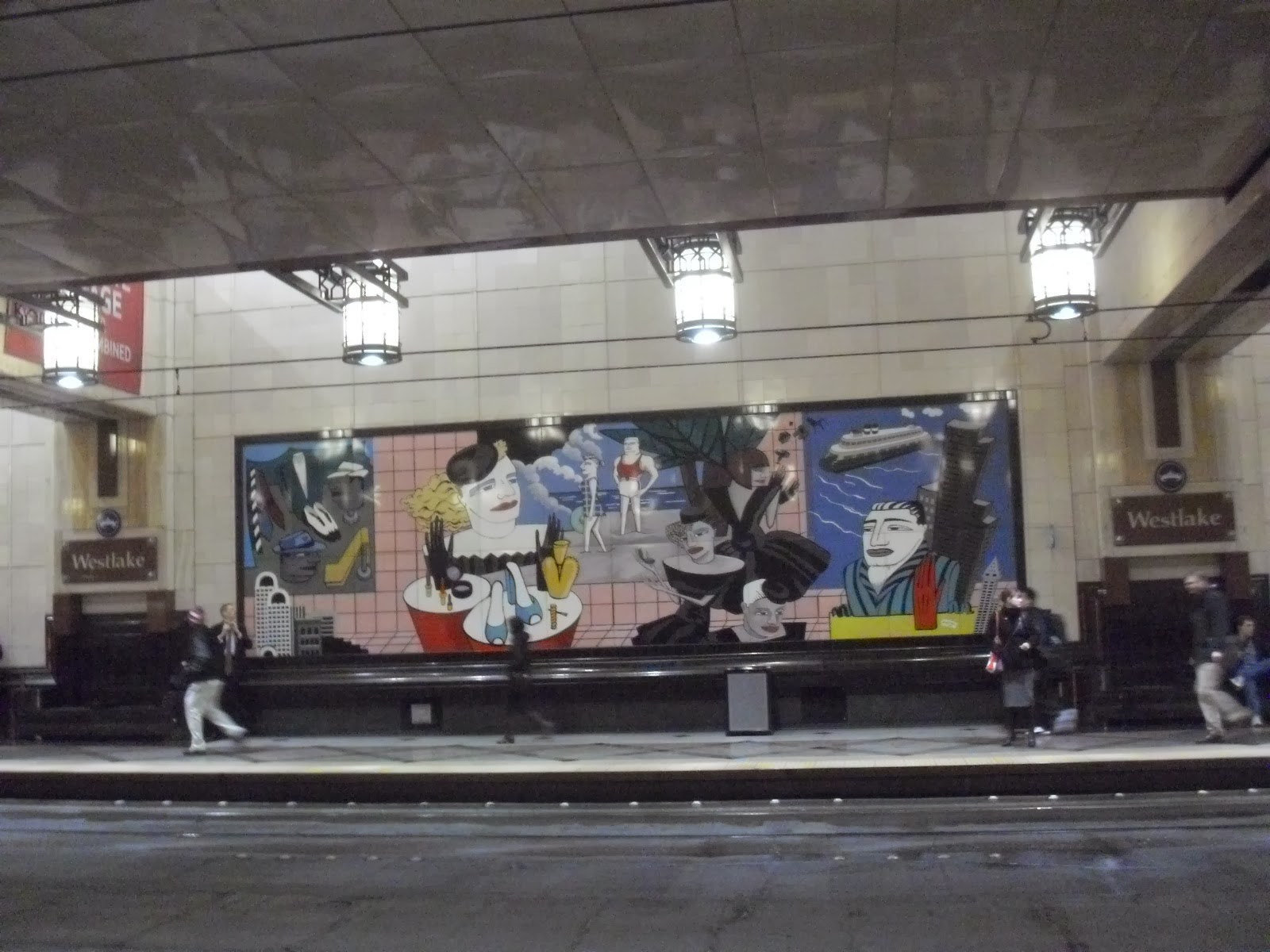 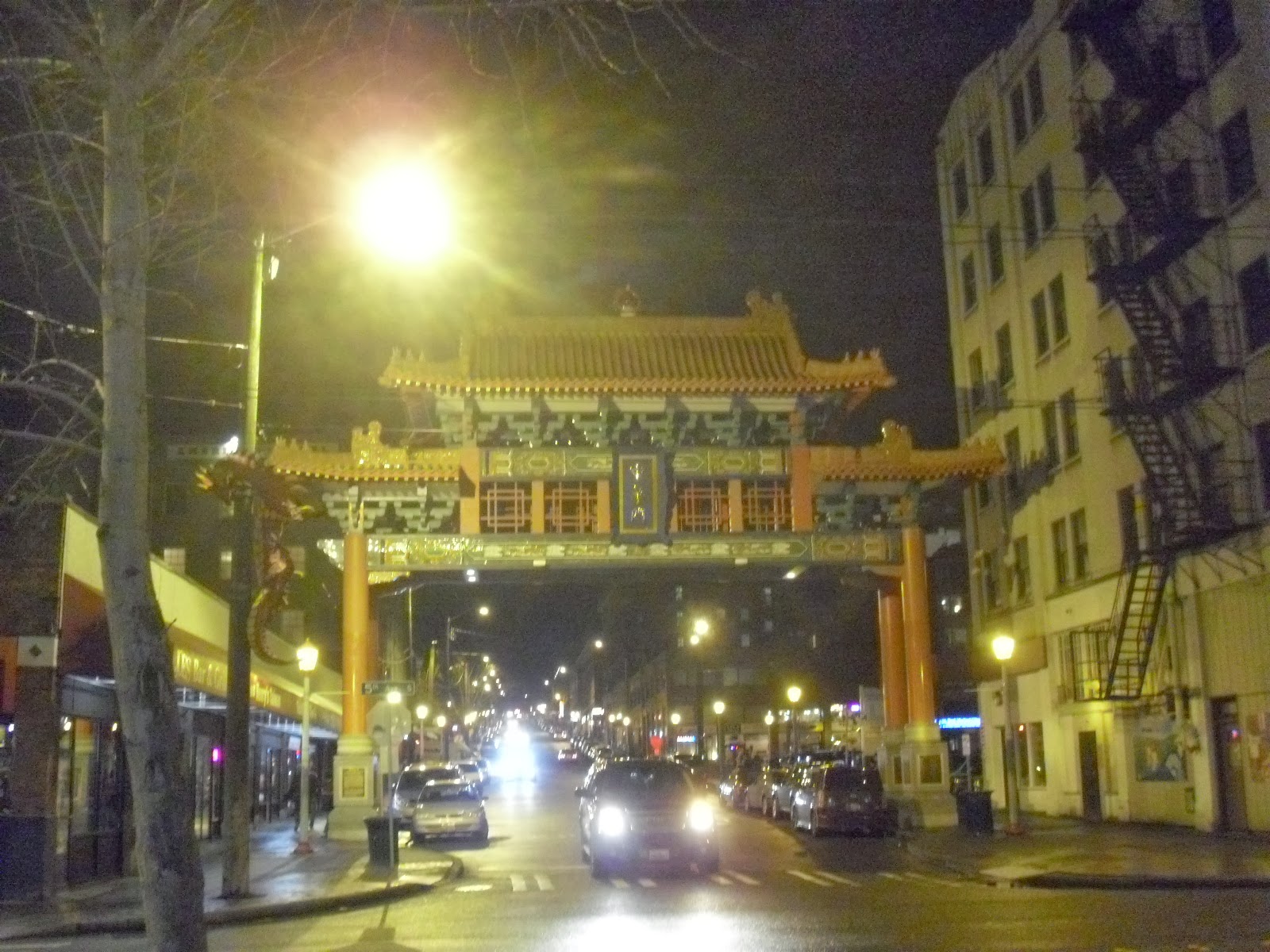 I did have the opportunity to have dinner in the International District, home of Seattle's Chinatown, though there were all types of Asian restaurants there. 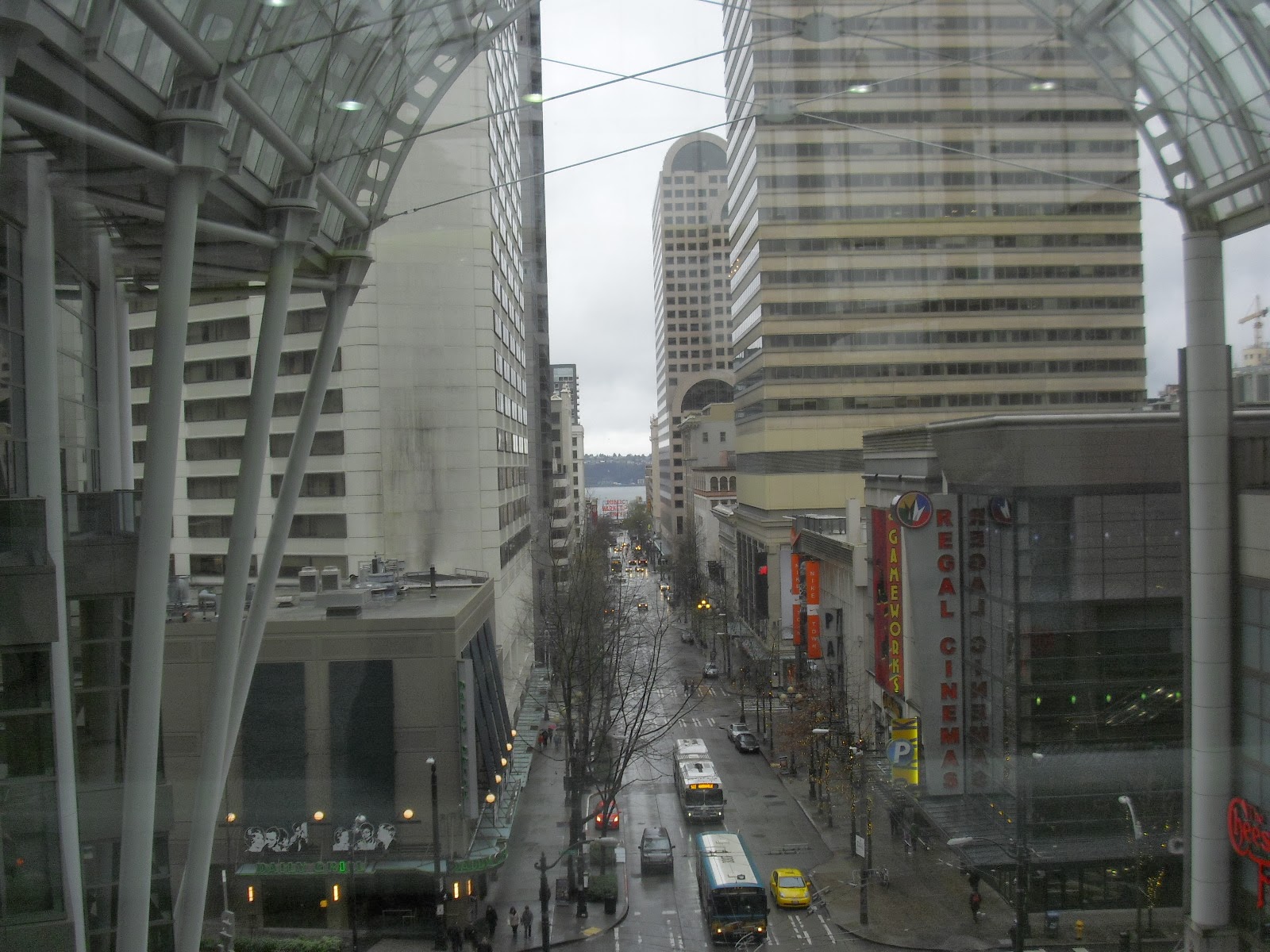 Looking down the street from the Convention
Center,  you'll spot the iconic Pike's Place Market: 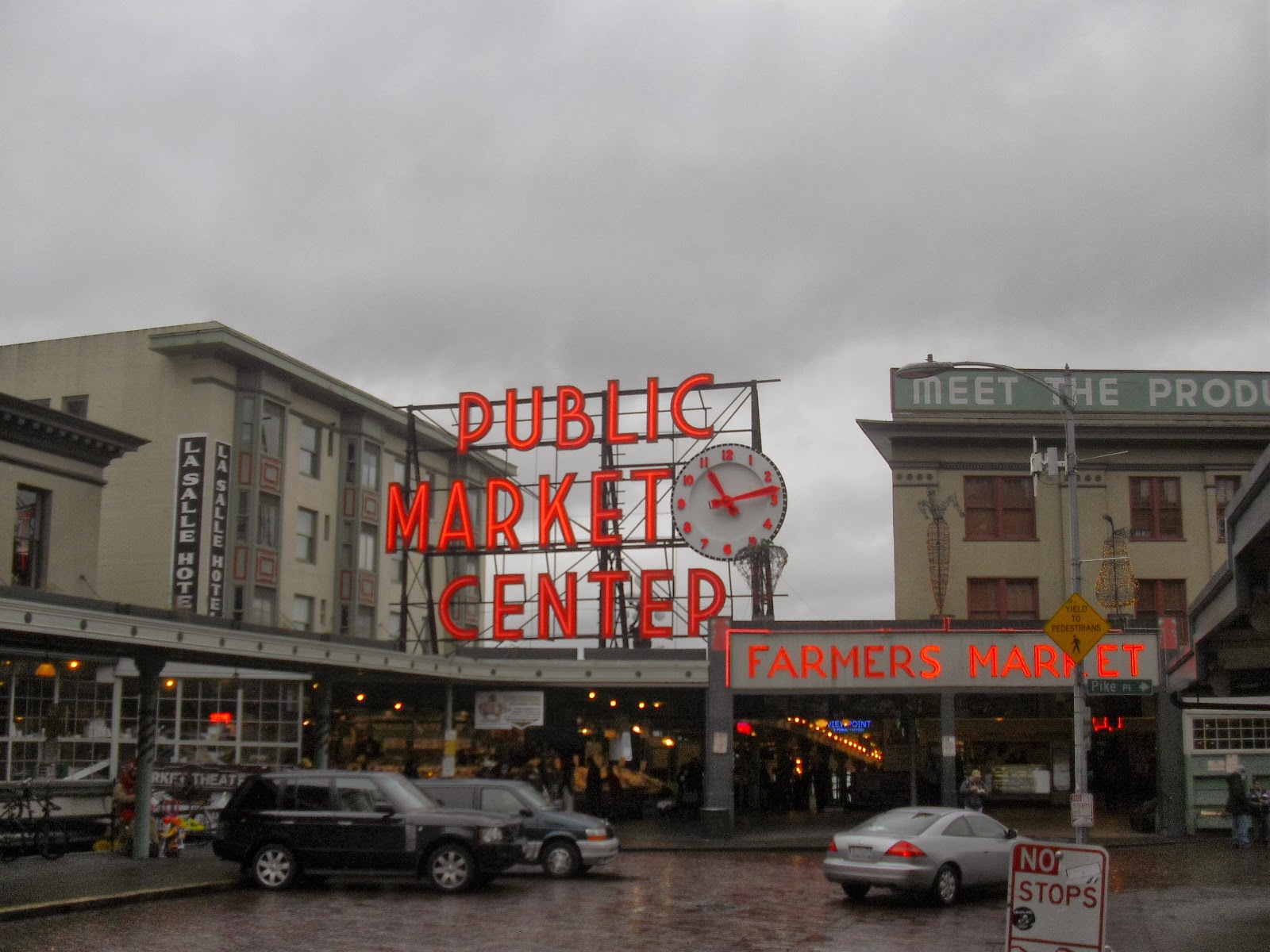 I had two clear memories of the market from my first visit: a quilt/fabric store and a chowder place.  On Monday morning, as the conference drew to a close, I volunteered to bring back lunch to my colleague (following the critical foray to look for the quilt shop).  Almost instinctively, I found them both again: Undercover Quilts and Pike's Place Chowder. 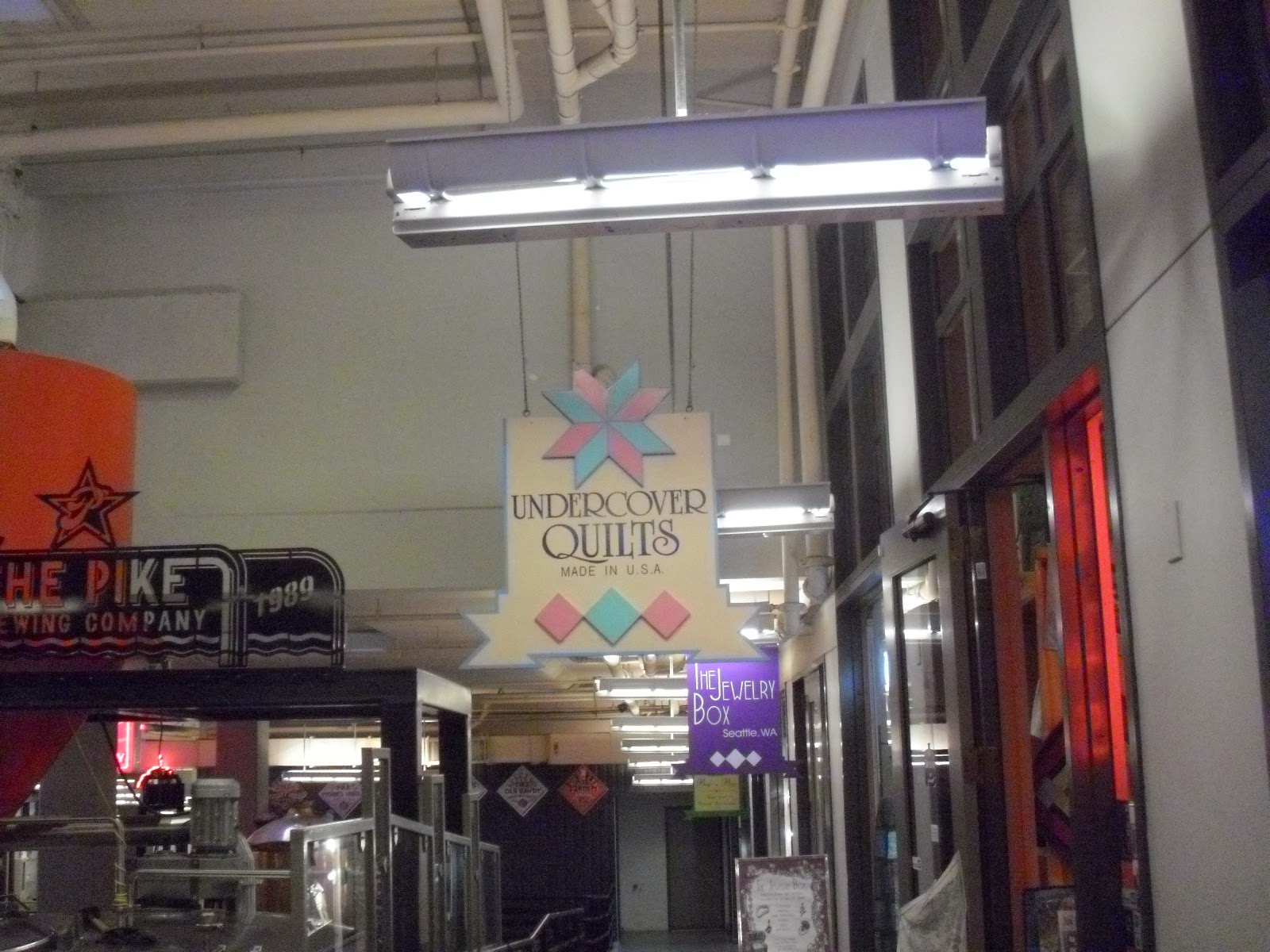 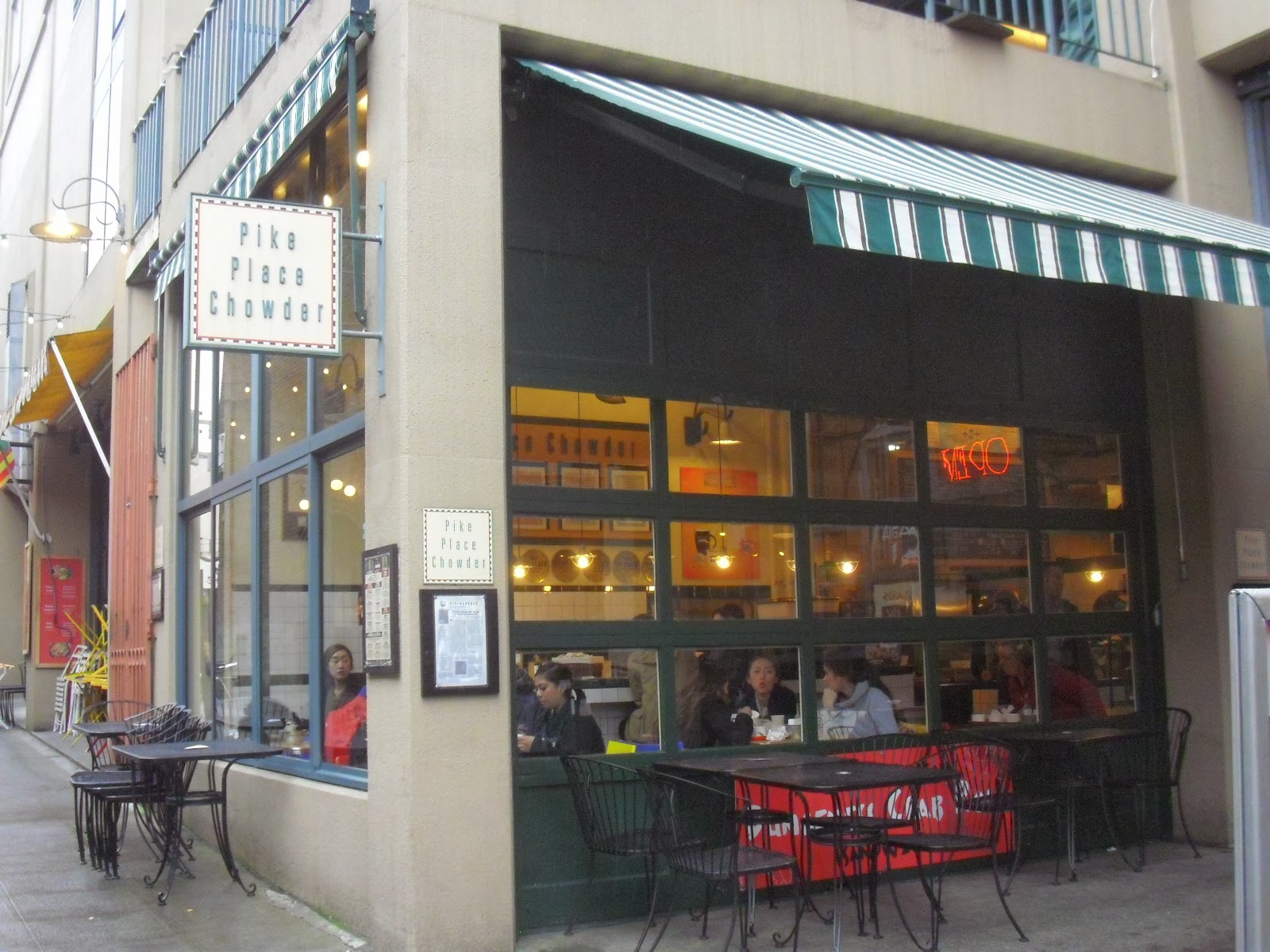 Undercover Quilts stocks fabrics with Seattle themes, perhaps especially commissioned for them.  I purchased a wonderful print which I used in the quilt I made D's BF as a gift for his college graduation!

Someday I hope to return to Seattle when it's not January and not so cold.  Maybe I'll even see the sun!