Next port of call was Juneau, Alaska's capital city.  Typical weather, we were told, was foggy and rainy, so we were certain to wear the raincoats suggested by the description of our shore excursion.  Very helpful suggestion! 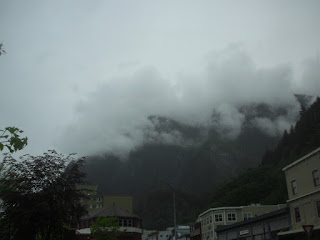 Our outing included a hike, then boarding a small boat to see if we could view some humpback whales in the inlet. 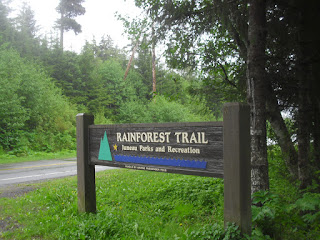 The trail through the rainforest was not too challenging for me to keep up, thankfully, and we learned a lot about typical plants living in that environment, both useful and harmful.  (Ask me about spruce-tip tea...)  I was taken by the many shades of green we saw as well as the wild lupines that grew near the lake. 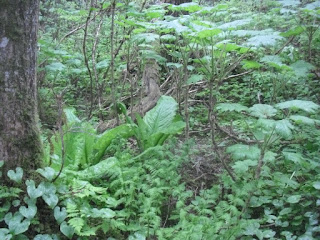 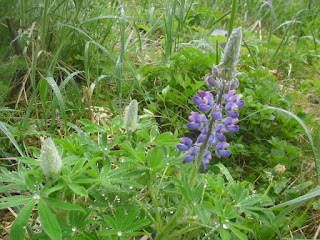 By the time we emerged from the forest, the rain had stopped and most of the nearby fog had lifted, a rarity at that time of year, we were told.  Unfortunately, the now-hospitable weather seemed to have used up our good luck as we headed out on the water for whale-watching.  A few spouts or tails were spotted in the distance, but none close enough to photograph or even to be able to say "Yes, we DID see a whale."  Our wildlife viewing was not totally unsuccessful, though.  We cruised past a buoy known as a resting place for sea lions.  If you can enlarge the photo, you'll see them piled on top of each other on the buoy. 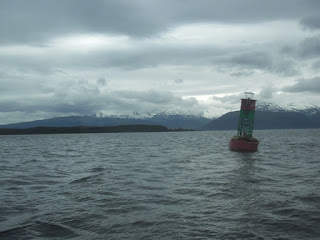 When our outing came to an end, we had some additional free time to walk around the town, grab a bite to eat, and wonder why Alaska had decided to make a city which cannot be reached by land (Juneau is accessible only by air or water) its state capital.
at July 30, 2019