Monday was sailing day.  We walked from our hotel to the cruise ship port where three ships were docked and began the process of being checked in.  In addition to the usual baggage and passport checks, we were photographed for our ship IDs which would get us on and off the Norwegian Jewel and would also be our on-board credit card.  Though it took several hours from start to finish, the process was well-organized and mostly painless.  We found our stateroom and went to the cafeteria-style dining room for lunch.  By 5:00, rain was steadily coming down, but we could view the departure from the window, with Vancouver (and another ship) in the background. 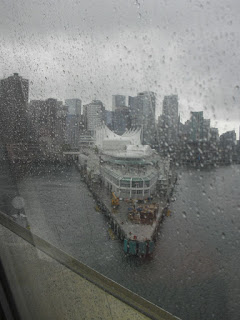 This was our first time on a major cruise ship so we did a lot of exploring to find out what was where, how to get various places, and, which activities we wanted to join.  We found that each day an overview of the day was published and delivered very early in the morning.  From bingo to shows to cabaret-type performances, there was quite a variety of possible things to do.  Through our week, we saw a comedian and a troupe of acrobats (their performance made more challenging as the ship was traversing some rough waters at the time).  But we most anticipated the shore days, where we would get to explore, either as part of an organized excursion or on our own.

The first stop was Ketchikan, Alaska, where we had planned unscheduled time. 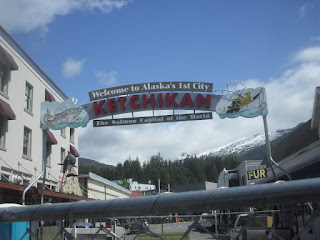 When we arrived, we discovered a local bus line ran from the center of town to Totem Bright State Park.  Over a dozen poles were found in this beautiful park, with helpful explanations of their history and meaning. 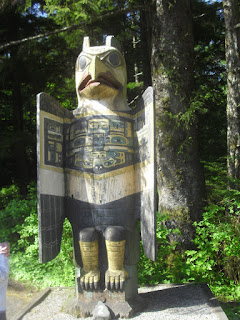 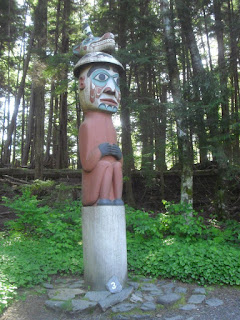 There was also a reproduction of a typical Tlingit building where groups would gather as well as a shed in which repair and restoration was completed on some of the poles. 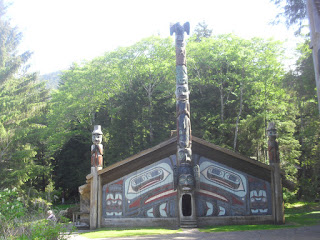 The park itself offered gorgeous views of the breathtaking Alaskan scenery and a serene place to wander along the trails and take in the sounds and smells of the woods in addition to the sights. 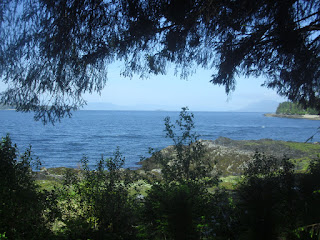 The return bus arrived on schedule so we went back to town for lunch, after which D#1 went partway back on the bus, to a stop that had been announced as a good place to find a hiking trail.   I chose to wander around the town and enjoy the surroundings.

In a small pocket-type park, I found some of the most glorious rhododendrons I've ever seen, along with bleeding hearts that covered the area under the shrubs. 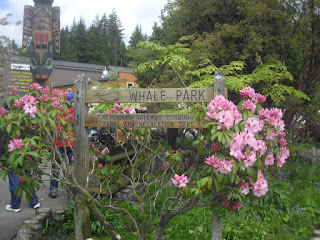 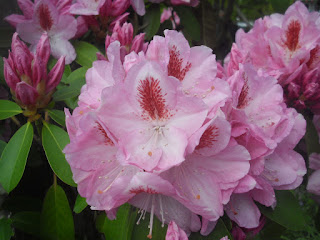 Since most of the coastal area was occupied by tourist-oriented shops and restaurants, I shopped my way back to the dock, where I met my daughter who had thoroughly enjoyed her hike.