On Sunday, January 9th, 2011, we lost a loving and beloved member of the family, our precious cat, Charcoal.  Though she was a part of our family for over 15 years, we can never know her exact age.  She was a stray who wandered into our Ohio backyard in the summer of 1995, when my daughters were 5 and 3 years old.   This tiny black feline -- who weighed no more than 6 pounds at any time in her life -- brought love into the lives of our family and friends in inverse proportion to her size. 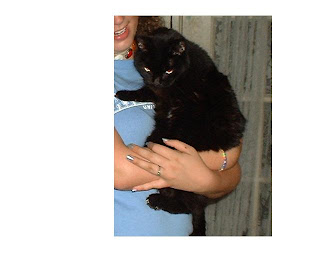 We called Charcoal "the cat who thinks she is a dog", a dog who never met a person she didn't love at first sight.  She would greet strangers and friends alike at the door, rubbing against them, pleading with her eyes to be petted (at least) or, ideally, picked up and cuddled.  When she was held, she would creep up to lie on the person's shoulder and purr into his/her ear.  Her purr was industrial-strength and could be heard across the room.  I cannot count the people who told me over the years, "If you ever want to get rid of that cat, just let me know."  My response was always the same, "Get in line, but don't wait for a call, since she's not going anyplace."   Several friends used to joke about smuggling her out under their coats, given her diminutive size.  So we laughingly instituted firm security policies upon their exit.

When workmen came to the house, she not only greeted them but was there to help.  Sounds didn't scare her, so, amazingly, she sat and watched while the chimney cleaner used his loud vacuum, or the plumber worked in the bathroom.  Sometimes, I had to confine her in another room to keep her from either being in the way or getting accidentally hurt, as she was determined to be in the middle of the action, and near the people.

The decade and a half we had together brought, predictably, both joy and sadness.  When my daughters were small, they would put her in their plastic toy shopping cart, throw a blanket on top of her, and race around the house with her as a passenger.  Always well-tempered and loving, she never objected and, when she had her fill of riding, she'd just hop out of the cart and find a place away from the action.  Always smaller-than-average, but healthy, her worst medical crisis was caused, ironically, by getting routine checkups.  When she was about 10, she developed VAS (vaccine-associated sarcoma) in her neck after an incompetent vet gave her rabies injection there.  Extensive surgery was required and for several years following, we were on the lookout for a recurrence.  Fortunately, she remained cancer-free for the rest of her life.

Charcoal always slept with me.  For many years, she was the 3rd presence in the queen-sized bed, and then, when my husband moved out, she kept me company.   It was always a mystery to me how firmly such a little thing  could confine me to a given position!   She would pin me down by nestling above the covers in whatever small space was present between my legs, effectively preventing me from shifting without moving her along with the blankets.  I often sleep on my side, and she would perch on my all-too-generous hip and settle in there -- sometimes with her head so close to mine that she was purring almost directly into my ear.   Does a sound exist that is more peaceful than the soft, constant purr of a contented cat?

My brother wrote in an email to my younger daughter, "You had one of the greats of the feline world!"   There are no truer words for her epitaph.  We look forward to seeing her again at the Rainbow Bridge, where all our beloved lost pets wait.
at January 16, 2011