Remember Part 1 of this post?   When I talked, at length, about how I came to be a quilter?  And then never finished?   Finally getting back to picking up where I left off.

What struck me about much of what I read in the diverse blogs was that the emphasis was on the quilter -- what we know, what we try, what we learn.   A good angle to consider, as I did in Part 1, and as many did in the blog comments, particularly Sandi/Piecemeal's and Carrie's.  As I already told Nancy, near Philadelphia, I wish she had not pulled her post and the comments. ( I think being able to see the actual source text is invaluable in a communications medium like the Internet -- prevents misunderstandings and incorrect inferences.) (But not my call.)

My first thought, however, was "but I try to make what the receiver would like."   This may be because, at least so far, most of my quilts were made for other people.   For example, though it does nothing to develop my own skills, I think the right quilt for my second-grade sponsored child was the one that I made with an assortment of novelty fabrics:  simple, bright, and cheery.  (Still needs quilting and red binding before it is sent for her October birthday.) 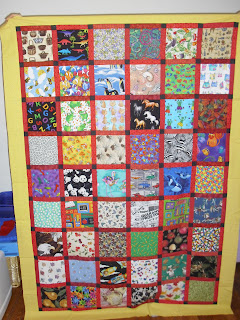 I've made some variation of this several times.  In some cases, it took me a long time to collect fabrics with the receiver's "favorite things", but the personal touch was far more meaningful than a complex pattern. 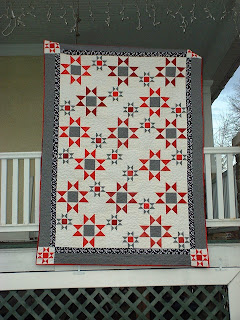 When the son of close friends graduated from high school and went on to Ohio State University, his quilt was, of course, Ohio stars -- in scarlet and gray, OSU colors.  The inner border is white trumpets on black, as he played trumpet in the band in high school. 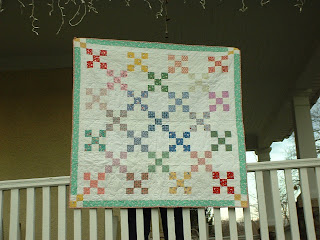 My "go-to" baby quilt is made of 30's repros and white in a 6" nine-patch, alternating with plain white squares.  Sometimes I piece part of the border from scraps, sometimes I "float" the blocks in a white border.   When the quilt is washed and it puckers up a little, it looks like a family heirloom and I like picturing that.  Even if the parents had a family baby quilt in good condition, they probably wouldn't feel like they could use it.  (Nancy is hand-quilting a more modern version of this quilt, with dazzling brights in the nine-patches and a delightful polka dot print as background.)    It's not the only pattern I've ever used for a baby quilt, but I expect I haven't made my last one. A recent variation used random squares instead of nine-patches, but was assembled similarly. 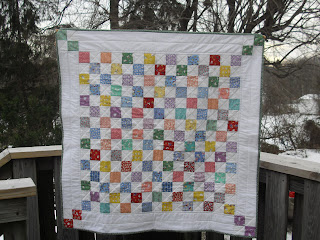 My pleasure in quilting derives from the designing and piecing of a top, usually with a recipient in mind.  Don't enjoy the quilting itself that much.  I do machine quilt -- mostly straight lines -- baby quilts, but anything else is too large for my pre-carpal tunnel syndrome hands and arms to wrestle around my machine.   I hand-quilted that very first, hand-pieced nine-patch for D#1, though it wasn't finished until years after the top was complete.  The name, therefore, was "The Two-Millennium Quilt" -- pieced in the 1990s, finished in the 2000s.  D#2's has been pin-basted and I will hand quilt that one too, eventually, as "The Two-Millennium Quilt, Part 2".

I still hand-piece these blocks and always have dozens of them set aside, ready to grab and put together as a "quickie" quilt.   Several years back, I set 110 of them into a queen size quilt for myself. 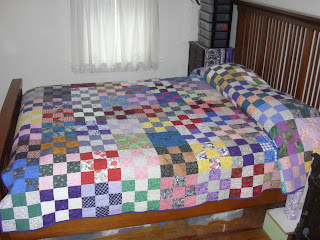 Recently, I pulled a couple dozen out from my "stash" and put them together in a comfort and healing quilt for a cousin who had undergone surgery for uterine cancer. 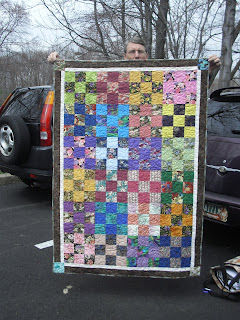 (Thanks to my work colleague, Tom for being my DQH -- designated quilt holder)

My fabric executor will, no doubt, be dealing with a bunch of hand-sewn nine-patch blocks when the last stitch has been put in my binding.