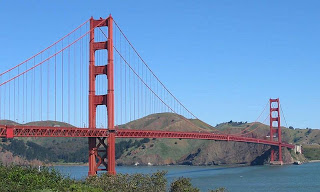 I woke up this morning, with the startling thought that I'm reclaiming San Francisco for myself.  I'm here alone on business for a few days.   Though I am by no means a world traveler, I have visited a number of cities in the U.S., mostly for work.  San Francisco is one of my favorite cities in the country.   As it has worked out, I happen to come here once a decade.

My first trip was in the late 1980s, before I met x2b.  That was when I fell in love with this place. In fact, when we first met, one of the things he and I discovered we had in common was that we felt the same way about this city.  We had wanted our honeymoon to be spent taking a train cross-country to S.F., but reality set in and no honeymoon ever happened.

Ten years ago, my job sent me here again.  Our daughters were 9 and 11 and we brought them with us.  They,  too, immediately succumbed to its charm.   While I worked, x2b and our daughters went several places things I'd gone before (boat trip to Alcatraz -- a truly FASCINATING place), and some I hadn't (they walked across the Golden Gate Bridge).  Together, we rode the cable cars, climbed the stairs to Coit Tower, visited the "crookedest street" (complete with spotting a large hairy man dressed as Wonder Woman), and celebrated D#1's "graduation" from grade school and "matriculation" to 7th grade with dinner on Fisherman's Wharf.  One evening we went to a restaurant in Chinatown which did not fit the stereotype of "Chinese restaurant" or look like much from the outside.  We feasted on incredible food.   Nearby was a playground where he and I sat on a park bench, watching them run off some of their pent-up energy.

Now I'm back, by myself once more.  I flew in early on Wednesday, so I would have the whole day to explore and I'm taking a red-eye out on Saturday night to give myself some free time when the conference ends.   After I checked in to my hotel on Union Square, I took BART to Berkeley (never been there) to a quilt shop that had been recommended.   On my way to the station, I took a picture of a cable car with my phone and sent it to each of my daughters with a single word:  Here!   D#1 replied that she was jealous, ordered me to eat some sourdough bread for her, and, of course, told me to have a good time.  I responded telling her where I was and where I was going, and she texted back that that was right up my alley!  (Yes, my daughter knows me fairly well...)
I had hoped that in this S.E.X.(Stash Enhancement eXpedition) I would find some fabric specifically related to the Bay area, but no luck.  It did yield a cut of fabric with California sights and a few assorted FQs.  There was a lot of stock there different from the shops I frequent at home, but nothing that tempted me strongly -- except for the yardage of the entire William Morris Tapestry line!  However, I held back, as I already have way too much WM until I use up .... oh about... mumblety-mumble yards of what I own.
Yesterday, D#2 sent a text asking me if I was going to eat in the Chinese place we'd been -- and I assured her that it was in my plans.  After the conference ended yesterday, I changed clothes, unwound for a little while, and headed off on foot to Chinatown -- more than around the corner but less than a trek.  By chance, I passed the playground and took a picture for the daughters. 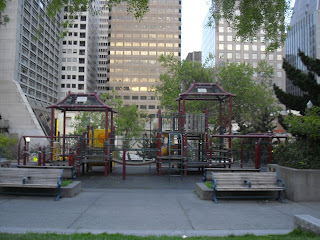 Waited in line at the restaurant (as I expected to do) and was seated with a Spanish-speaking mother and daughter. It's that kind of place -- a single and a pair at a table for 4.  As we ate, my tablemates and I chatted a little. While the mother appeared to know no English, the daughter, in her early 20s, spoke it well.  They were from Mexico City, and spending a week vacationing together.  I told them a little about my last trip with my daughters and how they'd gone from playing-on-the-monkey-bars age to just-into-college and graduating-from-college ages.
As expected, the food was delicious.  I had an appetizer of shrimp and green onion packets in peanut sauce, and an entree of sesame chicken with sweet potatoes in honey sauce.  This was the first -- and only -- Chinese restaurant where I'd ever had sweet potatoes, and I remembered them well from that 10-years-ago dinner.   We all had "blossoming flower tea".  The tea was served in a clear mug, with a floating rough-textured, walnut-sized ball that looked like dried moss.  Over about ten minutes, it sank to the bottom and opened up like a flower. 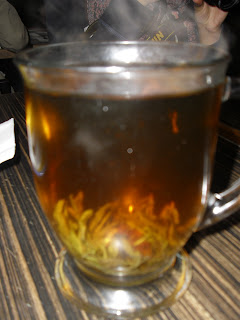 A little later, I noticed a light yellowish "stalk" rising from the base of the mug, waving gracefully with each movement of the mug. 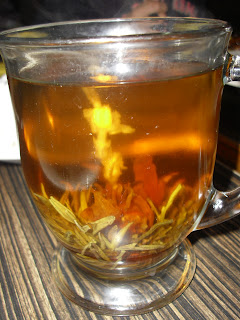 Enjoying the mild evening air, I walked back to my hotel with another wonderful memory of this unique city.  The sidewalks sparkled with something in the concrete reflecting the streetlight, and I seemed to be walking on a path strewn with diamond dust. 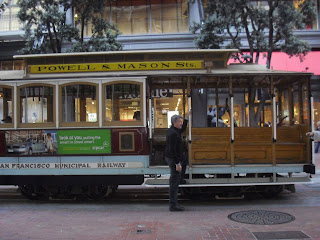 Tonight I'm taking the cable car to the Fisherman's Wharf area -- maybe Ghiardelli Square too.  (I will skip the ice cream place where the 4 of us shared a gargantuan ice cream treat designed for a family -- something like 10 scoops, with multiple toppings!)   I will eat seafood, buy trinkets for the daughters, maybe some chocolate for others.   And, like last night, I'll remember wistfully the wonderful family time we had back then, while making a new memory for myself -- coming full circle to spending time in a beloved place again, without an intense longing for what was, but with a satisfaction for what is right now.