My Godson has been a daredevil from birth.   He never crawled.  Instead, he went directly to walking at around 6 months, IIRC.   Before he was a year old, he would pull the kitchen drawers out of the cupboards, making steps to climb up onto the countertop.   Fearless.

Not much of a surprise that, at a young age, he became quite interested in sports.   He played little league baseball and was a gymnast.  And that was just the team sports!   By high school, he was an extreme skateboarder and in-line skater.   His dad would take video footage and post it on Youtube, then send me the link.  I'm not sure how his mother avoided having a heart attack years ago!

He and his family live in Ohio, where we lived when my daughters were born.   A few years ago, he attended an extreme sports camp near State College, Pennsylvania, so D#2 and I drove west to see him in action and meet up with his parents when they came to pick him up.   My heart was in my throat as I watched him ride,  jump, twist, flip, and land. 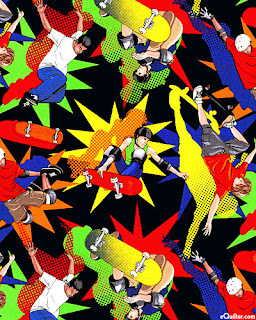 This year he graduated from high school and he's going to study -- wait for it -- high-performance motorsports next year.   Of course, I wanted to make him a quilt as a graduation gift.

I wanted to incorporate the extreme sports into it, so I found several appropriate fabrics.  Nothing quiet and subtle for THIS quilt!     Got these bright skateboarders to start with. 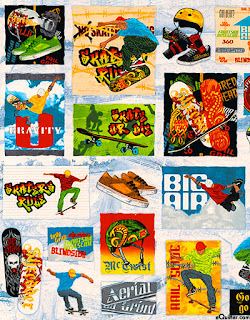 Later I found this panel with a similar theme.  The panel actually repeats all of these "boxes" so there is a pair of each.  The "boxes" are several different sizes.

I loved this flame-type fabric and thought I'd use it for backing.  The silhouetted skateboarders were a last minute, less vivid (for a change!), addition, but I only had 1/2 a yard. 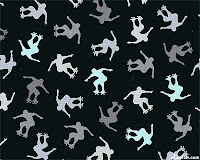 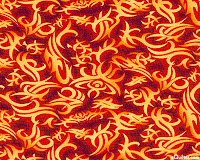 BUT, once I had all these great fabrics, the question became how in Heaven was I going to put them together??!??   I got more stalled and stuck with this problem than I've been with a quilt in a long time.

Finally, I decided to cut the panel into sections, and frame them out to a standard size with some tone-on-tone brights.   The black and gray became a narrow border, separating the center from the border of bright skateboarders. 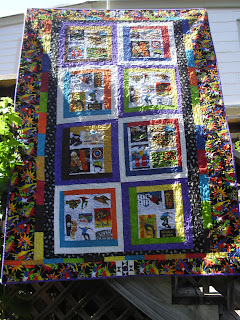 Since it got bigger than I'd expected (not an uncommon problem for me), my 2 yards of flames weren't enough, so I pieced it with some gold and a couple of fat quarters of race cars. 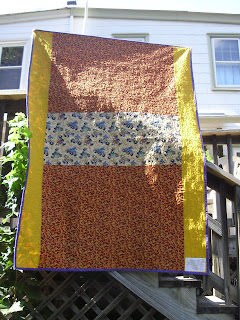 Daughters and I went to Ohio for his graduation in May.  I took the top with me so he could unwrap it even though I would be bringing it home to finish.  He loved it.  Finished binding and sewed the label on it last weekend and mailed it out early last week.  It arrived a few days later and was pronounced "awesome".
at July 28, 2011