A few weeks ago, my friend Pat brought a little flimsy to the Quilt Day at Another Area Church.  She explained that it was made by sewing strips together, and cutting the strip set to make quarter blocks.  She had found instructions on a video and sent me this link.

I was feeling the need for a break from my "to do" project list and wanted to just play with a new process.  So I pulled out a few 2.5" strips (width-of-fabric) and sewed them together as instructed in the video:  sew two strips to each other, press open, then sew the pairs on both sides, right sides together.

(DO watch the video for complete instructions -- I'm just describing the steps in general, as I thought this quick and easy method useful if you needed a simple, smallish quilt relatively quickly.) 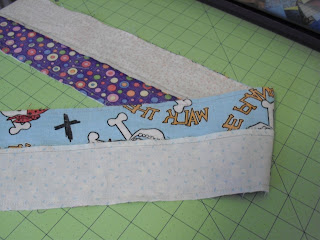 You use a ruler with a 90 degree mark to cut the strip set. 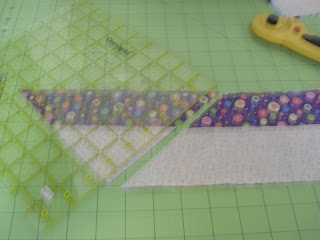 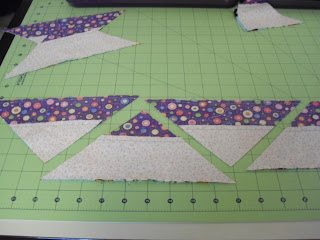 Pieces can be arranged different ways: 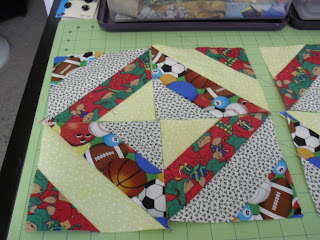 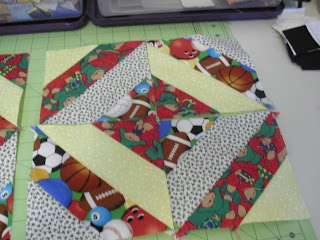 Since two blocks weren't really enough for anything, I pulled four more strips and made another pair of two: 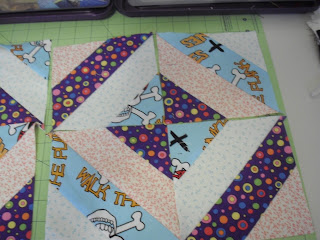 Then I mixed the two sets together to make four blocks, each with two quarters from each set.  I didn't measure, but I think each block is around 12" square. 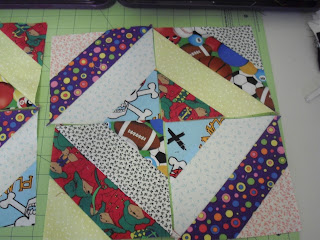 Sewed all four blocks together 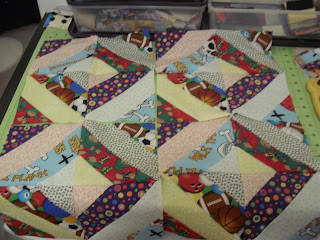 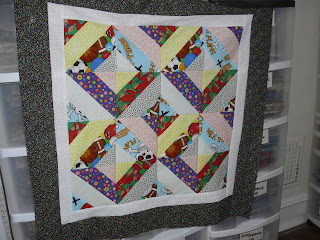 I found it necessary to handle the quarters carefully as all the outside edges were bias and I was afraid to stretch them out.   This was fun to make and would be a good use for a jelly roll.   Adding some sashing and/or a bigger border would make it a little larger for a baby quilt.

Think I will try this again.  I have some Kaffe Fassett fabric cuts and a jelly roll that would make 8 or 9 different vivid colored blocks.