A Tale of Two Kitties

It was the best of times. It was the worst of times. Best: there are two new kittens in my house. Worst: we lost two long-time feline family members in 2011.   I was left with a single cat for the first time in ... well, let's just say "decades".   And, having been adopted into a home where two cats already lived, Tabbitha had never before been an "only" so she wandered around the house, lost and confused. 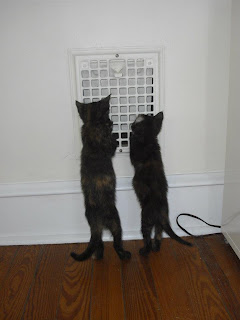 As I've been staff (dogs have owners but cats have staff) to at least one cat since I was 20, I know that loss is inevitable.  I also know that (un)fortunately, there are almost always many eligible animals "out there" when the time feels right to seek another. Since each fur-kid has a unique personality and cannot be replaced, I had always let more time lapse between losing and adopting, but the emptiness of the house (and Tabbitha's neediness) nagged at me.  Consequently, I spent WAY more time than I should have perusing the websites of the local SPCAs, the listings of other cat/pet rescue groups, or postings from individuals with adoptable kittens.   I knew "kitten" was the only way to go, so that Tabbitha would more readily accept the newcomer(s).   Of course, I started out thinking "kitten" -- singular.  Little did I know...

My daughters and I agreed that another all black or orange tabby would not be the best choice, as our memories of Charcoal and Mustard are too fresh and comparison would be inevitable.  I've always had a soft spot for tortoise-shell cats, but was also open to black & white or gray & white (tuxedo or otherwise).

As I was plotting out a Saturday trek through three counties to look at kittens in several shelters, I discovered a listing for a home in Fort Washington where a litter that included two torti sisters was being fostered.   Excitedly, I made an appointment to go see them the next night and forwarded the photos to my daughters.  Unhappily, the next day, the foster "mom" emailed that someone else had come the night before and decided to take both of them.  I was so-o-o-o disappointed that I hadn't even gotten to see them!   But, as fate would have it, the day after, another email arrived informing me that the original adoption plan had fallen through and they were still available!   I was THERE that evening, and, even before I saw them, I began to think of the reasons to take the pair.

So ten days ago, I took the tiny cat carrier -- big enough for both of them -- and brought them home to stay.  They are easy to tell apart.  One has a streak of orange on her face, as well as a small spot on her neck and on a couple of paws. She's adventurous and brave, usually the leader of the scouting party when they decide to explore some heretofore unknown area of the house.   And she has the typical torti-attitude.  Hence her moniker: Sassy. 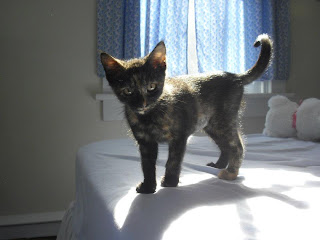 The other is the tiniest one of the litter -- visibly smaller than her sister -- and is a totally brindled-torti, with just a splash of orange on one paw.  Her eyes are rimmed with lighter fur giving her the wide-eyed look of a reverse raccoon!   Since she's such a mite of a thing, she has been named "Smidgen." She looks so innocent, but don't believe it for a minute as she's always right behind her sister in their expeditions around the house. 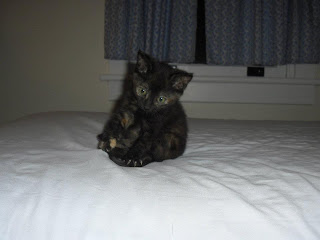 We're having a good time getting to know one another.  Tabbitha is mostly unimpressed, while they are a little wary of the large fluffy one.

They have begun to "sleep" with me.  If you can call racing around chasing each other, pouncing any time my legs moved under the covers, crawling under the quilt to box with each other (and tickle me in the process),  using me as an obstacle course, and playing "Queen of the Hill" with me as the hill, "sleeping".  But eventually, they settle and, if  I wake up at night, I find them curled up side-by-side, in the crook of my arm.  Fingers crossed that I get at least a part-time lap cat eventually.
at October 25, 2011