Starting the past September, my D#1 had a fellowship in Washington DC.  An internship with a congresswoman was a key part of this opportunity.  She received a stipend and housing quite close to the Capitol.  The young man who she is seeing was serving as a White House intern during the same time period -- one of relatively few who worked in the actual White House.  Two weeks ago, because her fellowship was ending, I drove to Washington DC to help her move out of the house she shared with other interns from a variety of programs. We took that chance to visit the Capitol building and to see the holiday-bedecked White House (thanks to said young man who fast-tracked security checks for us... well, for me anyway!). 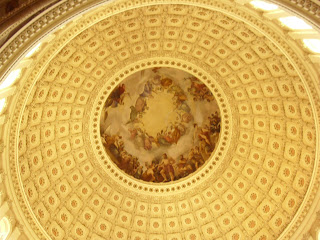 Our visit to the Capitol building was fairly fast-paced so I didn't have time to take many photos.  Left is the Capitol rotunda and below is the statue in the Hall of Statuary of Henry Melchoir Muhlenberg, the pastor-soldier of the Revolutionary War, one of two statues placed by Pennsylvania. 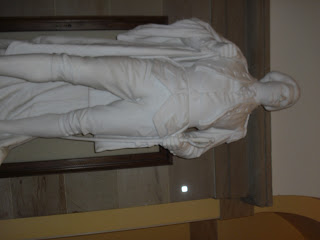 (Yeah, I know that Henry is sideways -- need to figure out how to get him to rotate 90 degrees counterclockwise.)
There were a number of Christmas trees (duh) in various rooms, but my camera didn't like the lighted ones, which all came out blurry.  The main one in the Blue Room was more cooperative. 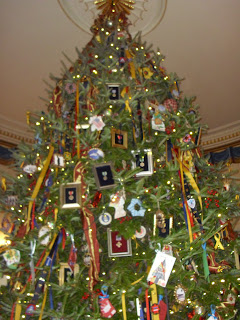 I was told the White House florist likes putting "Bo" in different arrangements
around the building.  Here's one near the entrance -- easily two feet tall if I remember correctly. 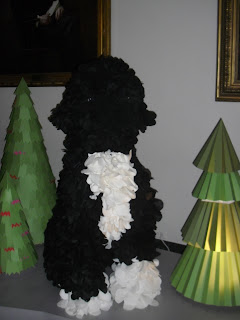 The library had another "Bo", lying by the fireplace.  The White House Christmas card portrayed a similar scene.   (Ask me how I know...[wink]) 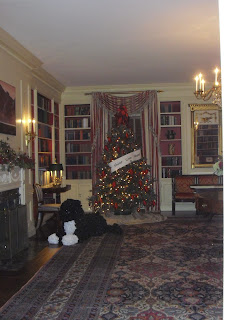 This beautiful Nativity scene was in the State Dining Room.  Wish I could have viewed it more closely! 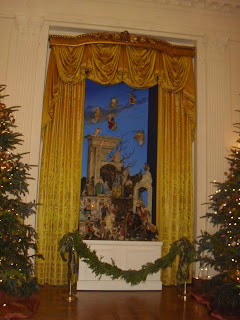 At the end of the Dining Room was the replica of the White House, in white
chocolate!  (Another Bo -- not to scale.) 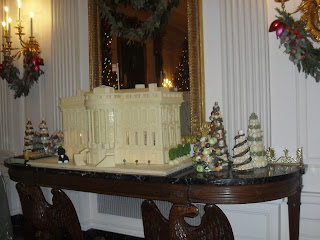 The sunset view from the Blue Room (I think), with the Washington Monument
at left, was stunning.  Straight ahead is the Jefferson Memorial, though it's lost in the shadows of the photo. 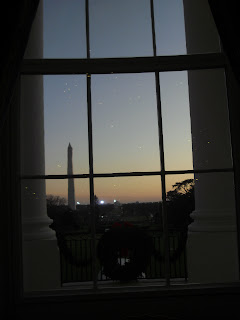 Here's the tree in the Blue Room, as seen from the foyer of the South (?) exit.
Note the Presidential Seal above the door. 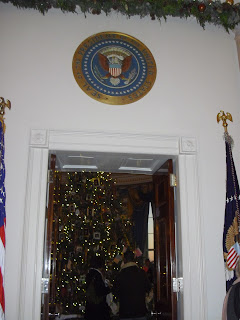 And, finally, my daughter and me! 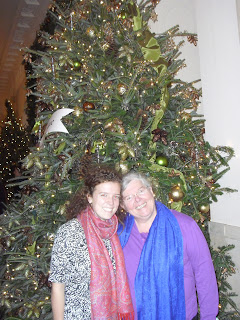 D#1 is home until mid-January when she returns to the Capital.  Anyone who wants to keep me company on a trip to deliver her belongings, just let me know!
at December 21, 2011