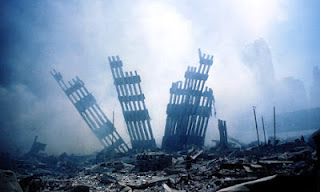 I mostly shy away from political stuff, since my friends generally know where I stand.  If anyone else is reading, if they happen to agree with me, I'd be preaching to the choir, and if they don't, nothing I say is going to change anyone's mind.

Given our proximity to New York and Washington DC, the event of 9/11/01 touched many people around here more closely than the general population between the oceans, but less so than those in the three true "Ground Zero" locations.

I share the following two links because they touched me deeply.

Elizabeth Kaeton is an Episcopal priest, whose blog I have read for quite a while.  If I recall correctly, she was serving in New Jersey at that time and spent a good deal of time at the chapel at Ground Zero, helping and comforting the workers during the weeks and months after.   If you search her blog for "9/11" you will find other wise and insightful writings.

The other, linked by a commenter on another blog by a writer probably 150 degrees (minimum) from "Mother" Kaeton.   Recent photos from Libya.  Choked me up and reminded me of those days in early September 2001 when the world seemed to come together in our shared horror.

Interestingly -- or not -- I had more trouble than I expected when I searched for an image of rubble at Ground Zero.  I wanted one with no prominent religious or national symbols (no cross, no flag) and one that was not taken from a place that seemed to me to be a political, conspiracy, or hate site.  Things that make you go hmmm....   The one I used was from the website of the UK newspaper, The Guardian.
at September 13, 2012