Time for a catch-up on What I've Been Working On -- Obsessed By Scraps version.  In the past few months, I finished one quilt that was made from block-swap blocks, made another that began as a leader-ender project, made a dozen blocks from scraps and put them together in another quilt, and finally started digging out blocks that were made out of scraps and put away.  I had become obsessed with working with the pieces/parts that were already done.


For several years, I made different units out of scraps.  Either I stored the units (whatever they were) "as is," or I sewed them into blocks and put the blocks aside.  In my zeal to use up things I'd already begun, I've managed to finish 3 more tops.  The first was made of more the the "v-blocks" used for the baby quilt I'm currently hand-quilting.  This will made a nice "snuggle" quilt for a young boy (stereotype, I know, but check out the novelty prints) either through children's hospice or through another organization.  I bought flannel to back it and I will quilt it myself, probably without batting. 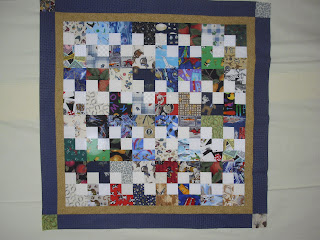 Another habit of several years' duration was to sew scrap triangles into half-square triangles (mostly) of various sizes into 12.5" blocks.  I had accumulated 24 of these before I made myself stop.  For some unknown reason, I drug these out of the drawer and decided to set them into two tops. 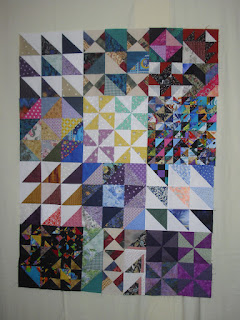 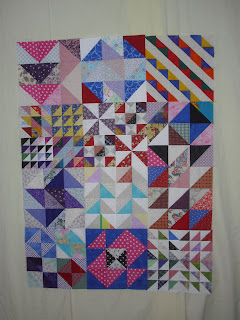 Pretty wild, huh?  If nothing else, these two tops illustrate about any possible way that HSTs can be used.  I think I'm going to call these "Too **** Many Triangles", Parts 1 & 2.    Someday I'll put a thin, near-solid border on each one and call them done.  Right now, they're put away for later.

In a drawer of "sample blocks", I found 9 that fit together fairly well, in size and color scheme: 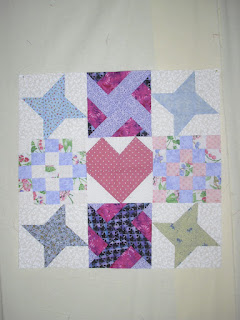 This whole center piece is just 18" square, so I thought a border of small squares might work, though it first needs a small border to frame the center. (This was my "audition" green, but I ended up with a different shade..) 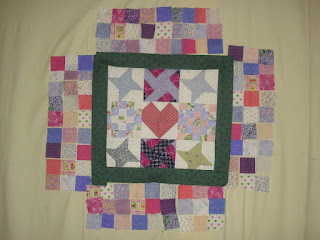 Needs something other than squares to finish out the corners, maybe, so I'm considering scrappy log cabin blocks.  This will be a "companion" to the boy quilt above, also backed with flannel and quilted with no batting. 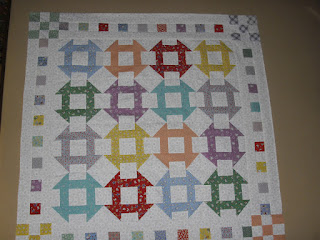 Finished this top yesterday at UDLC's Quilt Day. Another for me to quilt on Lizzie.  Baby's due in late November, so I have a little time.

I realize that, in some ways, I've begun to feel like I can't have my dessert until I've finished my dinner, that is, I can't start a new project until I've completed the many projects for which I already have some or all of the blocks -- something neither practical nor desirable!  Unfortunately, for me, the attempt to be a good steward of my resources (use up my scraps) can morph into that obsession that says I have to save the "good stuff" for later.  This easily transfers into my life in general and brings fear and stress.  Years ago, I heard a sermon that has always stayed with me.  It addressed whether we give out of a sense of scarcity or out of a sense of our abundance.   One type gives what's left, but only after other needs/desires/whatever have been satisfied, the other gives first, recognizing the many gifts that have been received.   Sometimes -- not often, I hope -- but sometimes, I forget the abundance in my life.

So I'm walking away from any more (new) scrap projects for now (even thought those crumb blocks are calling me...and I even have the sashing picked out!). Very soon, I will cut into these luscious fabrics to start a quilt for D#2's "new" bedroom. 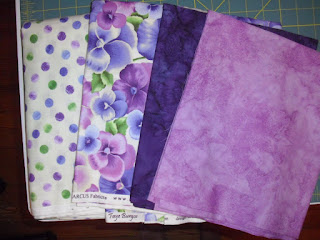