On Christmas Day in London, there is no public transportation.  No buses, no Tube.  There may be taxis, but otherwise, if you don't have your own car, you walk.  Almost all retail establishments, including restaurants, are also closed.   Some serve Christmas Dinner, but require reservations well in advance and are generally quite expensive.  A few weeks before our visit, D#2 informed me that she had arranged a surprise for Christmas Day dinner.  She noted that we would have to walk (quite do-able from our hotel) and we would eat at mid-day rather than in the evening. She also mentioned that there would be a Christmas Day service first.   Sounded just fine to me at the time, but, given that we had missed Christmas Eve services, when Christmas Day dawned, I was very pleased that we would have a church service to attend. 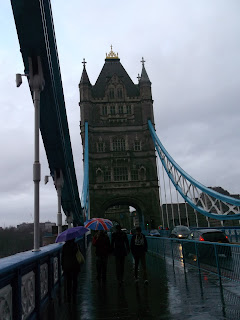 It was raining (no surprise) when D#2 led us across Tower Bridge to All Hallows by the Tower, the oldest church in the City of London.  All Hallows site has held a religious institution since the 7th century when it held a Saxon monastery.  In the intervening times, among other roles in history, the church had been where they took the bodies of those executed on Tower Green.  Samuel Pepys had watched the Great Fire of London from its tower in 1666.  The church itself had been damaged heavily in the Blitz (actually, this was common in several places we visited) and rebuilt thereafter. 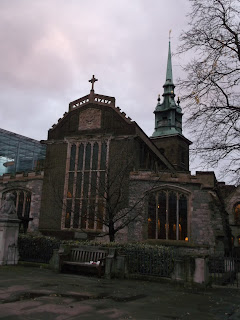 Not only does All Hallows have an American connection, it has a Pennsylvania connection, and even a Philadelphia one!  Here is where John Quincy Adams and his wife were married and William Penn was baptized!  And Christ Church, Philadelphia is its "sister church." 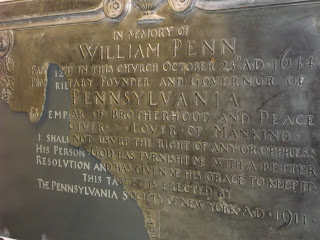 The church is Church of England, but the service thankfully included a few carols that were familiar to us, Lutherans though we are. 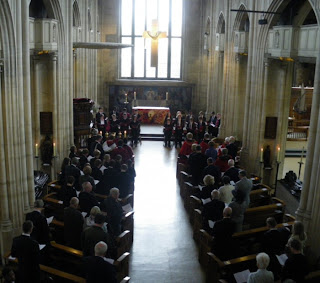 After the service, more sparsely attended than in the above picture, all who were there -- or who wandered in at any time -- were invited to stay for Christmas Dinner!   The more-than-reasonable suggested donation was to go to the food banks for Tower Hamlet, one of the poorer areas of the city.   No one was turned away even if they didn't donate, and I suspect many others, like us, gave more. 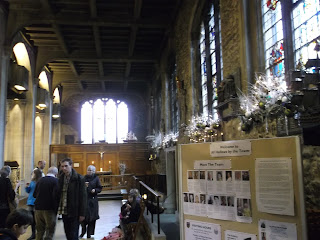 The verger gave us a brief tour of the Undercroft area.  There we saw a section of tesselated Roman flooring from the 2nd century which was found during renovation along with other historical artifacts from the intervening centuries.  When we came back to the main floor, we found the area at the side of the sanctuary was set with folding tables.  "White or red?" was the question and our first glasses of wine were poured (with many to follow).  All the guests claimed seats, we sang grace to the tune of "Frere Jacques", and serving began. 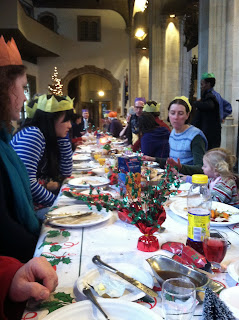 At each place was a Christmas cracker, quite the novelty for us Yanks.  But we pulled them, found our toy and donned our paper hats!   Salad, rolls, turkey, gravy, potatoes, parsnips, and much more that I can't remember!   Oh yes, and more wine... 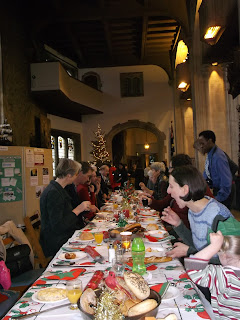 My best guess is that there were 50 people at dinner.  With guests from Canada, Germany, Italy, France, Croatia, Netherlands, mainland China, Hong Kong, Japan, Australia, and the U.S. (and maybe I missed someplace), it was like having lunch with the United Nations!    We chattered about why we were in London, for how long, etc., as well as about what a typical Christmas dinner would be at our homes, and what our other holiday customs were. 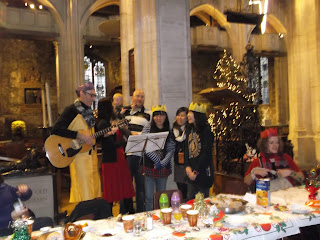 As we had our dessert (Christmas pudding, of course), the verger took our his guitar and led us in singing a variety of Christmas songs.  It was mid-afternoon before we helped to clear the tables, fold and put away the tables and chairs. 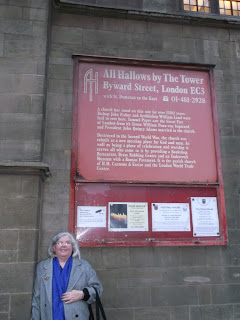 By the time we began our walk back to the hotel, the rain had stopped and it was almost dusk.  At dinner, the Vicar had asked me what the highlight had been for me during this trip.  I described him how much I loved visiting the Tower of London and soaking up the history there.  But, in fact, I told him, Christmas Day dinner at All Hallows had been more memorable and meaningful than anything else I had experienced (or hoped to experience) during this trip.   What a truly wonderful and unique event! 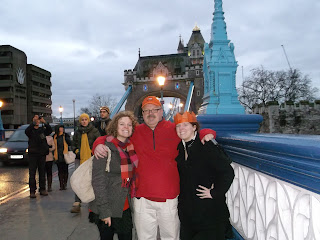 We owe our thanks to the chaplain at Queen Mary University, Jenny, who had informed D#2 about this welcoming place and their annual meal!    I must remind D#2 to email her with our deepest gratitude.