It was twenty (no FIFTY) years ago today Sunday night, February 9, 1964.  I was 14, in 9th grade and IN LOVE with The Beatles.  I knew that I wasn't alone in that feeling, but I had been especially stricken, reading about them, buying every available record (both 45's and LPs -- remember them?), and following their every move through newspapers, teenage "fan" magazines, and, of course, listening to the pop station on the radio.

Two days before, the Fab Four had stepped off a Pan-Am plane from Heathrow Airport in London, and arrived in NYC on the first trip to the states for all but one. George Harrison ("my" Beatle) had previously (and pre-fame) visited his older sister, Louise, in Illinois.  When you were as big a fan as I was, you knew this stuff! 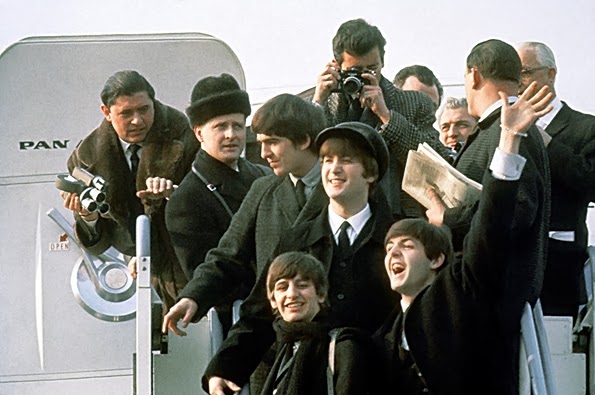 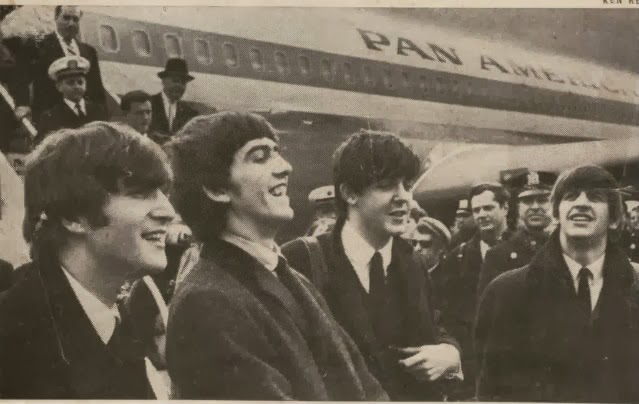 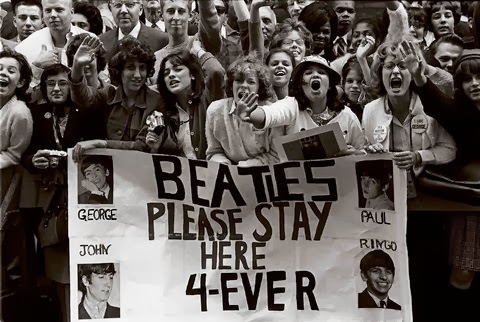 Scheduled to perform on American soil for the first time, live, on the Ed Sullivan Show on Sunday, February 9th, they were greeted by hordes of American fans.  "Beatlemania" had officially begun.

From the moment the performance had been announced, I had been doing my best to beg, wheedle, whatever-it-took to make sure I was allowed to watch that night.  My father, a classical musician, had no use for "that noise" as he called pop music.  He barely tolerated the 1940's crooners that my mother favored, but pop/rock music??  NO WAY!  I had a small portable record player but was only allowed to listen to "my" music in my own bedroom on the third floor, high above the rest of the house and its residents.  Somehow, whether through promises or pleas, I managed to convince him that my life would no longer be worth living if I was denied the opportunity to watch.

The Ed Sullivan Show was a television legend.  This variety show was where all the important entertainers showcased their talents for the millions.  The Broadway musical, Bye Bye Birdie, later paid tribute with "Hymn to a Sunday Evening". Singers of all types, opera to country, comedians, puppeteers, ventiloquists, trained dogs, the Bolshoi Ballet! -- you name it -- a selection could be found on each Sunday night show.  Elvis Presley's first national appearance was on Ed Sullivan (though the camera famously was trained above his waist, so his "swiveling hips" did not risk offending the audience).

I seem to remember that we had yet to purchase a color television, so that night, I staked out my place on the floor in front of our couch, facing the black and white console television -- one of some 73,000,000 viewers.  Not even the most fervent few would have predicted that these young "lads from Liverpool" (as Ed called them) had started "the British Invasion" and would change the face of  popular/rock music forever.

My eyes were glued to the screen, afraid to miss a note or a word, and my heart pounded almost audibly in my chest. 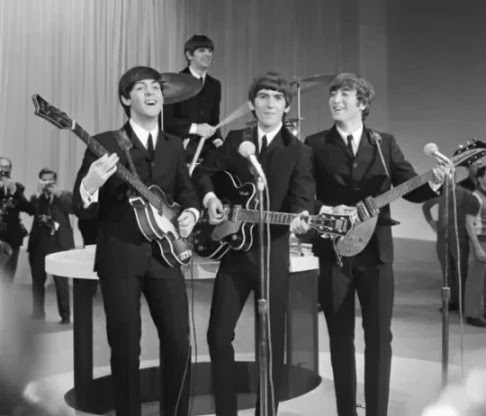 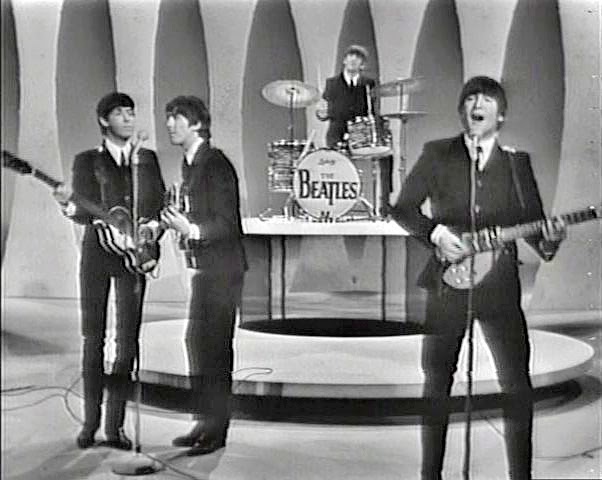 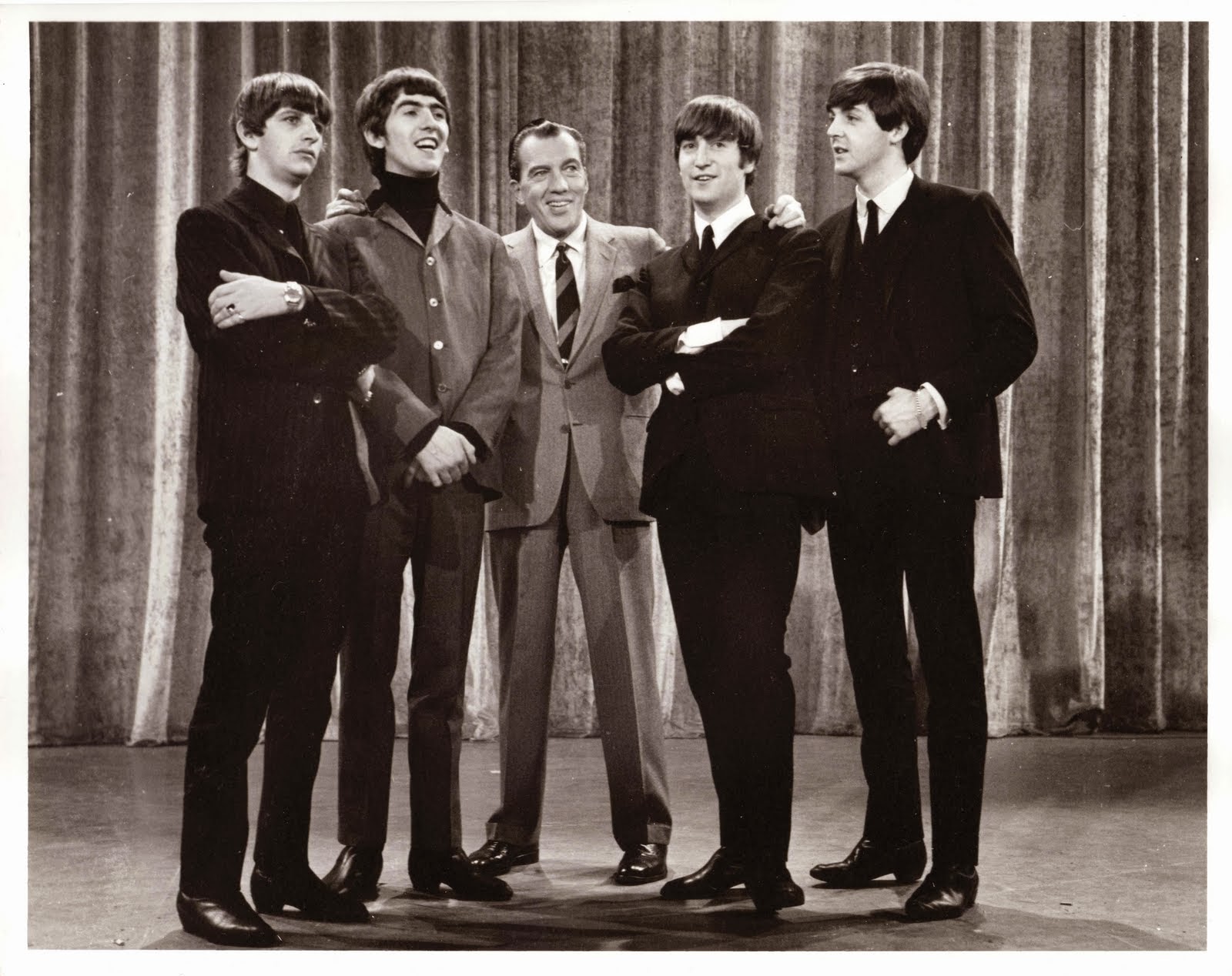 My memory has more holes than Swiss cheese these days, but I clearly remember riding in a car with my aunt right around that time and telling her about the Beatles.  She responded by confidently informing me that, in five years, no one would remember who they were.  Fifty years later, John, Paul, George, and Ringo are not only not forgotten, but honored with publications, television programs, and awards.

I have never stopped being a Beatles fan, carrying my affection and interest into my adult life and now into my dotage!  George always maintained his special place in my heart, even now, so many years later and over a dozen years since his death.  These four musicians, together and separately, were perhaps the only constant that I've carried there for five decades, as I've lost parents, gained and lost husbands, grown apart from and then close to siblings.  My daughters were raised on their music, I proudly confess.  And I expect this relationship will continue until the day I'm gone.  We love you Beatles!  And, my sweet George, I'll "never get over you."