Last winter, when my company announced that our last date of existence would be April 30, 2019, I really needed something to look forward to.  Going on a trip seemed to be an excellent way either to inaugurate my retirement, or to have a one-time-last-while-I-have-some-$ celebration.  As D#1 gets generous vacation time, we were both happy that she could join me.  After some discussion about where to go, we settled on taking a cruise to Alaska, with a post-cruise stop in Portland, Oregon, as it was one of the states that I had not yet visited.  Our ship, the Norwegian Jewel was to sail from Vancouver, BC, so we added an extra day in Canada before departure date.

Though our flights originated in different cities, we both had a layover in Toronto where we boarded the same plane for the trip west.  After an uneventful flight and an easy trip into town on public transportation, we checked into our hotel and set out to walk along the waterfront, heading toward Stanley Park, one of the largest municipal parks in North America.  After quite a distance we reached our destination, but I was tired so we didn't explore much of the park, except to look around an arbored structure with flower beds around the perimeter. 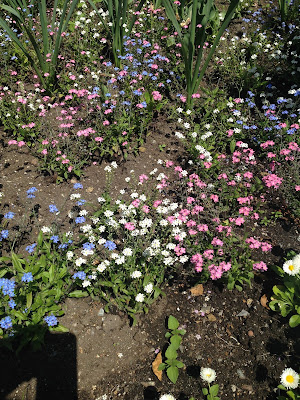 The trek back to the hotel was more direct (and a little shorter, thankfully), and after lunch, we went our separate ways for the afternoon.  D#1 wanted to visit the Capilano Suspension Bridge Park where she could spend time literally in the trees on bridges and walks far above the forest floor.  As an agoraphobe, I opted out of that trip and walked a few short blocks to the Vancouver Art Gallery where I found they were having a special exhibit of impressionist paintings. 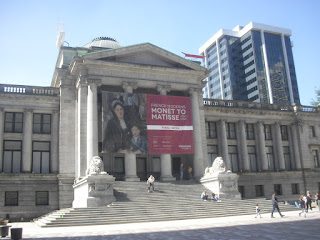 Though I am very fond of the Impressionists and enjoyed the show, I really wanted to see some First Nations art, given our location in the Pacific Northwest.  I asked one of the museum employees about the places to visit and he recommended the Bill Reid Gallery of Northwest Coast Art which was only a short distance away. 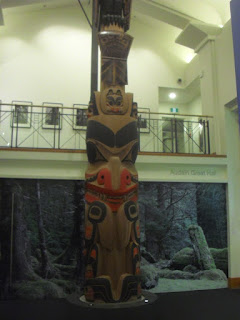 In addition to the permanent collection, which included the "story pole" above, the gallery housed a special exhibit called "Womxn and Waterways" featuring female First Nations artists in various media. 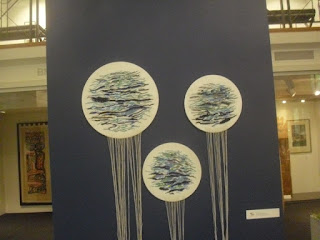 
Right: close-up of one part 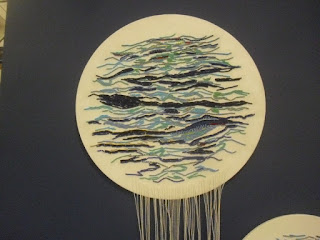 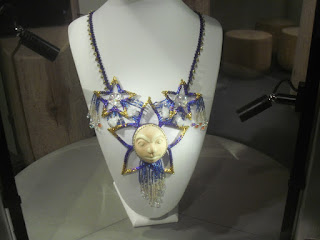 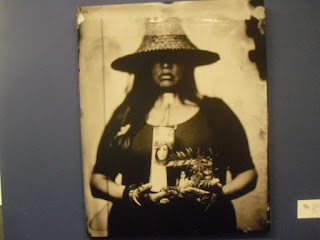 We reunited at the hotel and set off for Granville Island where we strolled through the public market with its food and crafts, walked past a variety of shops, and chose a waterfront restaurant for dinner. 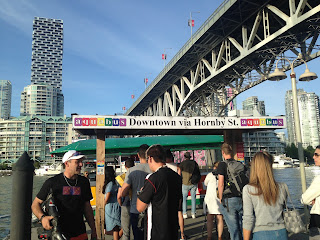 A water-taxi took us back to the mainland, where we returned to our hotel and prepared for our cruise departure the next morning.
at June 23, 2019