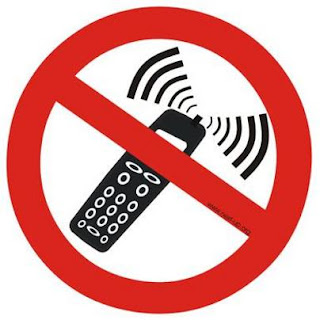 OK, so I guess it wasn't REALLY about cell phones.  In retrospect, I realize that the whole cell phone rant was about being unable to communicate whenever and wherever I am, being disconnected (from my daughters, especially), dealing with my budgetary issues, and, not least, still adjusting to doing everything myself.

And it was about loss.  About losing -- without warning -- the contents of an object that had been with me almost constantly for three years, since before my life, as I knew it then, was shattered.

Late August 2007: Just days before my older daughter went off to college, we (all four family members)  hopped into the car, heading for the nearby phone store so we could all acquire "real" cell phones.  This was how we were all going to stay connected with each other: family plan, no limitations on calling among ourselves.  Initially I got the "plain Jane" handset, while the other three got fancier phones.  When I got home, for the first (and, so far, only) time in my life, I got "technology-envy".  So back we went and I swapped my "plain Jane" black-no-camera model for a sharp-looking, shiny, fiery-red model with texting and camera (not that I was ever planning to use them, mind you).

When my life imploded less a few weeks later, that little red device became my lifeline; in my unbearable pain, my talisman.  Though, of course it couldn't really avert evil or bring good luck, it was a critical tool for coping with the destruction of my life around me.  I remember, immediately after receiving the Rejection Speech, when I simply could not stay in that house for one more minute, when I knew I was incapable of driving safely, when all I could do was walk away....  Phone in hand, I got as far as the end of the block, where I collapsed on the ground and called my sister to break the incomprehensible news.  Weeks later, I sat on a swing at the local elementary school playground and, through my wracking sobs, just two clicks would "contact" a friend, so I could just let it out.  On late night/early morning walks when I couldn't sleep, I carried it with me, for comfort as much as for security.   When my younger daughter's therapist would call to touch base prior to an appointment, I would pull off the road and park to talk to her.

On that mere four ounces of electronics, I had photos my older daughter sent me from the National Mall on the frigid day of the President's inauguration, when she walked several miles because the Metro was overcrowded.  There were text messages from my daughters, saved from their victories, large and small, and from their reaching out to me for advice or simply to express their thanks or their love.  The texts were locked to prevent accidental deletion, and were there for me to read over and over whenever I needed to remind myself why I had to continue to do whatever had to be done.  Because they needed me to be there, for whatever reason.

Three years later, I'm (mostly) used to doing everything by myself.   It's not like I have a choice, is it?   I'm even at the point where I find myself doing the most of the legwork toward finally divorcing.  Partially by my choice (goal of saving money since we've dealt with the property/financial stuff), but partially because of his inertia.  It's time.  I'm ready.  And, for my own reasons, I don't want to wait until he decides to make it a priority in his life and in his schedule.  I know how long that can take.

But sometimes, in a moment of weakness or mental exhaustion, I'm hit with the memory that I used to have someone to share the responsibility: to take out the trash, to clean the litter box, to work with me to put the shelving unit together, to stop and get milk on the way home.   Someone to compliment and thank me, to make me coffee in the morning, to listen when I had a bad day, to tell me that it would be OK -- whatever "it" was -- that we would get through it together.

Now, I have to be all about DIY.

Follow-up: Within 48 hours,  I'm supposed to have a refurbished "stupid" phone.  Don't really want much more right now, and it's all I can afford, especially since I have now taken over paying the bill for the girls and me.  The one bright side?  It will be purple.
at September 21, 2010