What I've been working on

Been avoiding housework lately (nothing new about that...) and taking refuge in my sewing room.  I now have three tops ready to go to the longarmer for quilting.

First up, though last to be made.  My cousin, just three months younger than I, recently had surgery for uterine cancer.  She and I were very close as children and teenagers, but not so much as adults.  But I want to let her know I am thinking of her and praying for her.   I whipped together this quilt out of the stash of hand-sewn nine-patches I have made over several years.  Many of them were made when I traveled, as a small box with pre-cut squares, a needle and thread is easy to transport.   For this quilt, I pulled 24 blocks with asian/metallic fabrics. 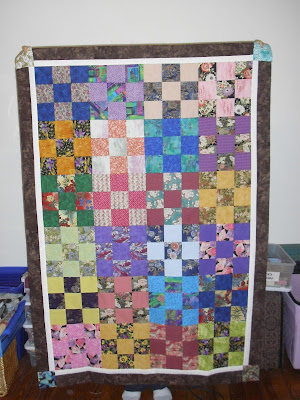 This goes to the quilter first so I can mail it out to my cousin.
Next, I finished a top that was started at the July White Oak "bonus" retreat: a bordello bargello for my German daughter.  She picked out the majority of the fabrics on a trip to Lancaster County before she went home.  Her birthday is in late April and she graduates from high school this year, so it's a joint-occasion gift. 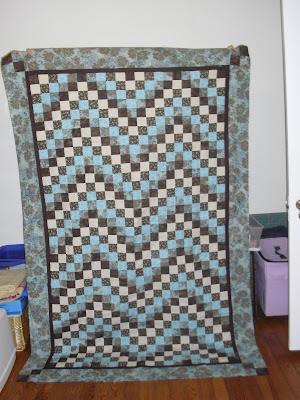 After the William Morris tesselated stars has been quilted, this one is next.
Finally, another project begun at an earlier retreat.  I sponsor a little girl on the Lakota Sioux reservation in South Dakota.  She is in 2nd grade right now. 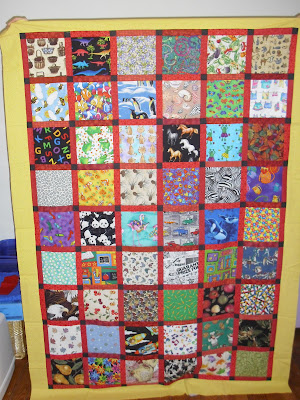 As it is a gift for her October birthday, I have a few months to have it quilted, and bind it in red.
After retreat weekend, I have to do taxes and housecleaning, but I've enjoyed indulging myself for the past few weeks.
at March 08, 2011