On Friday morning, January 20th, I flew into Dallas to attend the mid-winter conference of the American Library Association.  I'd been there once before -- for ALA mid-winter a few years ago -- and really didn't find it to be a place where I wanted to return.  My clearest memory of that visit was walking around, looking for somewhere to eat dinner, but finding myself alone, at dusk, in the middle of a sea of empty parking lots.  Not an inviting place or a pleasant memory.  However, wherever ALA meets, I go.

The meeting was in the Convention Center, where there was a difficult-to-miss sign marking the escalators to the main floor, where the exhibit hall was located. 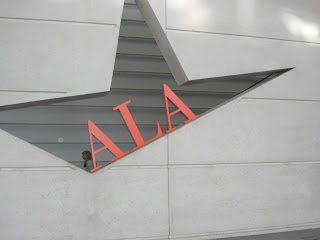 On the way to the Center on Saturday morning, from the shuttle bus window, I noticed a large red Christmas ball on the sidewalk.  Large as in "probably over 4 feet in diameter".   Looking around more carefully, I spied this sculpture outside what I know now is City Hall. 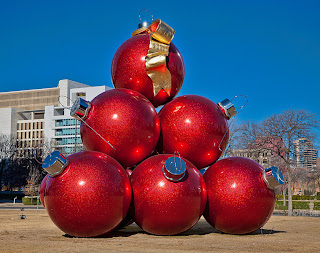 There were, in fact, several Christmas balls within about a block of the main sculpture, whimsically suggesting to me that they had rolled away from the main pile.  Just across the street from the Convention Center was a multi-part sculpture of a cattle drive in Frontier Park. 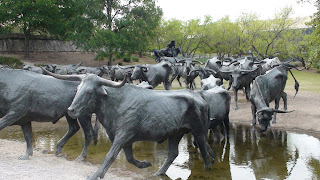 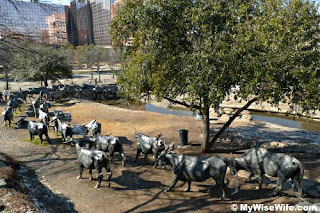 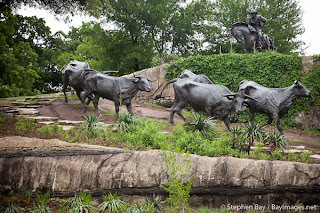 Nighttime view from the window of my 9th floor hotel room was similar to this.  In addition, I could see the moving neon of the Omni hotel.   Full disclosure: except for the ALA logo, these photos are from the Internet. The battery in my camera died and I hadn't brought my recharger.

As an exhibitor, I spend the bulk of most conference days in the exhibit hall where I have to dress professionally -- unusual for me, as I can wear jeans and t-shirts to work throughout the year.   A few years ago, I bought a basic black shirt-dress which serves me well on these occasions, but somewhere along the line, I lost the fabric belt.  Consequently, I was delighted with the gift from my friend, Nancy, of a belt made from William Morris fabric, with purple flowers no less!  This conference was the inaugural appearance of the belt, but I'm sure it will be seen many more times! 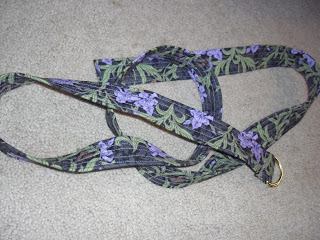 When I travel, I take the opportunity to eat at a variey of places, as I generally avoid chain restaurants.   On most trips, my colleague and I have dinner together one evening.  Last summer we had perhaps the ultimate dining experience at the Commander's Palace in New Orleans.  We considered looking for another high-rated restaurant, but decided to do something completely different.  He'd come in early on Friday to visit an art museum in Fort Worth, and had lunch at Rudy's Country Store and Bar-B-Q in Arlington.  So we went back.  Total contrast from the usual conference fare: long picnic-style tables, covered in red and white checked oilcloth with big containers of sauce on the table: Rudy's "regular" and "sissy" sauce.  I had chicken, falling off the bone, with sissy sauce, a side order of delicious cole slaw, a "long-neck" bottle of hard iced tea, and we split a piece of mystery pie that turned out to be buttermilk.

At  the other end of the spectrum, the other memorable meal I had was at the Y.O. Steakhouse.  As you might guess, steakhouses are easy to find in Dallas.  Though I seldom eat red meat, I chose this one which was a short walk from my hotel, as it advertised seafood as well as steak.  They also serve game -- not that I was interested.   The waiter recited the dinner specials and I almost ordered the salmon.  But the final item on the list was ostrich steak!   An ostrich is a bird, so it's not red meat, right?  Hmmmm...  why not?! 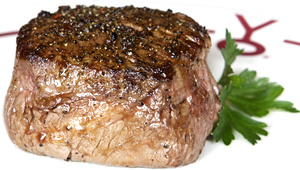 The meat, served as two filets about two inches thick and the same in diameter, had the look and texture of beef, though slightly chewy.  Served with a pomegrante glaze, the flavor was difficult to describe, though it was mild and delicious.

The exhibit hall closed mid-afternoon on Monday and I was ready to head home.  Arrived around midnight and Sassy and Smidgen met me at the door, as usual.  They were as delighted to see me as I was to see them.  Dropped my suitcase on the couch and went upstairs to crawl in bed.  The next morning I opened it to retrieve something before I went to work.  Later that day... 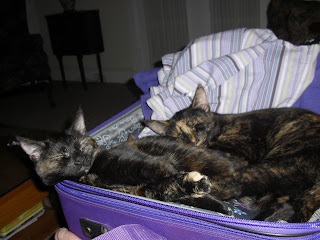 Perhaps they're telling me they want to go along next time.