Last fall, Pat blogged about a "technique" called a "jelly roll race".  While it didn't seem like something I'd be much interested in, she brought the two she had made to a group sew-in and they were quite interesting.  Both batiks, the colors seemed to flow nicely across the top.

Not willing to invest a lot of money in something that felt "experimental", I kept my eyes open for a less expensive alternative and found this mottled rainbow jelly roll -- two strips each of ten colors.  But what really clinched it was this fun fish print that contained all the same colors as the jelly roll, but more vivid, so I bought the only two fat quarters left. 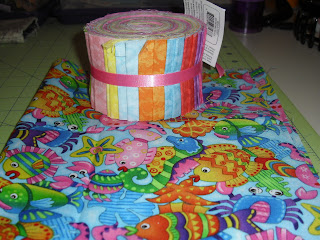 I cut the fish into enough 18" strips to alternate with paired strips and started sewing end to end.

SURPRISE!  Instead of a quilt-proportioned rectangle, I ended up with one that was long and skinny.  Note to self:  using 20 strips (what was in my jelly roll) does not result in the same shape as using 40 (the usual number of strips).  A "duh" moment! 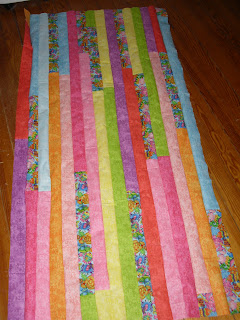 Clearly, something had to be done to rescue the project.  I counted the number of strips across (16) so I frog-stitched (rip-it, rip-it) three seams to result in four sections with four strips in each. 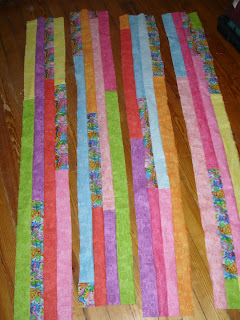 Next, I measured the width of the sections and cut each one into squares so I could arrange them into a more useful shape.  Thanks for the help, Smidgen! 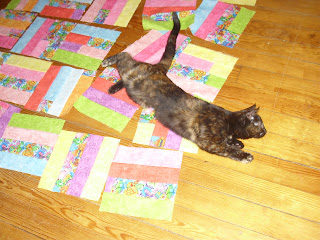 An arrangement of five blocks by five blocks (chosen from the 28 I started with) will result in a top just under 40" square. 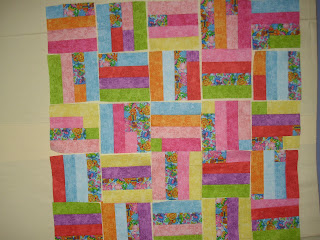 All that is left now is to sew the blocks together.  I will probably not add a border to it, but will eventually quilt it myself for some children's charity.   In conclusion, my findings were that this approach to sewing strips together does make a top quite quickly, even if you don't use them in the original way (but you might need to "unsew").  I did have fun working with the bright cheery colors in the fabrics!
at February 21, 2012