Between traveling and inertia, I find myself seriously behind on blogging, so here goes a first step to get caught up.

Arrived home from Chicago on Wednesday night and, after work Friday, left for the much-anticipated spring White Oak retreat.  We had, as usual, a wonderful group of women where  I met Suzan for the first time, as I'd missed the fall.  The others the regulars I've known and loved for several (or more) years!  Here's what I worked on. 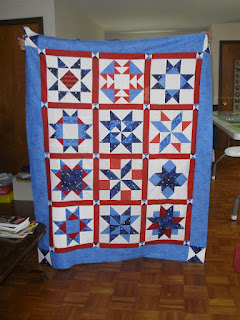 Started Friday evening with red, white, and blue star blocks made by the Uvulati for a quilt to be given to a veteran in hospice.  One of our international members, Judi, had sent fabric and I'd agreed to set blocks into a top.  Came out quite nicely, I believe:


Wrapped up that top on Saturday morning, and turned my attention to a top that I had thought was finished.  You may remember the pastel + fish jelly roll "mile a minute" I finished a little while ago. 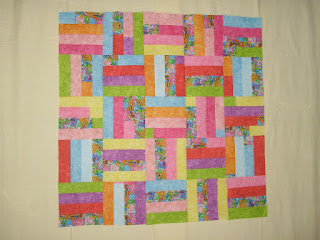 I had not planned to put borders on it.  But a few weeks later, in my LQS, I found this, which demanded to be added! 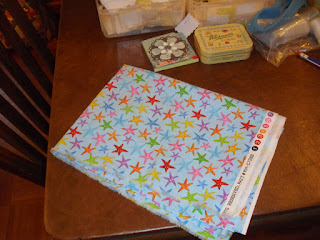 So....  I added a white border first, then the stars, with green and white QST corner blocks 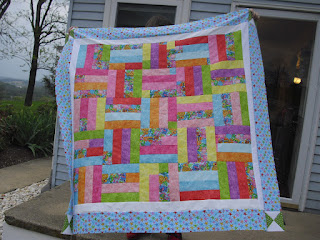 That project wrapped up and added to my pile of projects to quilt with my new QE4 (Pfaff Quilt Expressions 4.0).

I seldom use a single line of fabrics for a quilt, but I was quite taken by the "Amelia" charm packs when I found them a while back and bought a couple, plus some yardage for borders.  I borrowed a book of patterns for "Schnibbles" from Pat Deck and found one I liked a lot.  Got the center of the top finished. 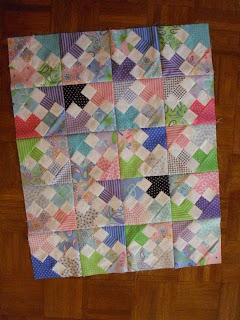 The last project of the weekend was one made of scraps that I'd pulled out sporadically but wanted to get done and ready to quilt.  The strips were done, so it didn't take too much to finish the main part of the top:  In one of my shopping expeditions I bought fabric for a small border but didn't get it added during retreat. 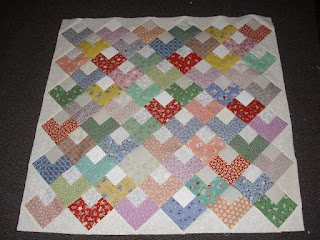 When I arrived home on Sunday, I discovered that the water heater had been leaking and I had a wading pool in the basement.   I do thank heaven for small favors, as, had it happened during my previous or succeeding trips, it would have been four days, rather than two, before I got home!   After doing the limited amount of disaster control possible, I unpacked my sewing stuff, keeping in mind that I was to leave for Paducah on Wednesday morning!